How will COVID-19 affect productivity in the UK?

The impact of the current world pandemic looks set to have an unprecedented impact on the world economy. The secretary-general of the OECD stated on the 23 March that a global recession looks “increasingly likely” in the first half of this year, “and we must act now to avoid a protracted recession”. According to IMF chief Kristalina Georgieva, the global economy contracted by 0.6% in 2009 as a result of the 2008 global financial crisis, but major emerging markets like China and India at the time were growing at a rapid rate; in contrast, some forecasters believe that the current the downturn could be 1.5%. Following restrictions on the opening of pubs, bars and restaurants (3 days ahead of the now even wider restrictions on movement announced on the 23 March), it was being predicted by the Unite union in that up to a third of the UK’s 3.2 million hospitality jobs are under threat.

What is likely to be the impact on productivity in the UK? Obviously, it is too early to make any definite or accurate predictions, so here the intention is to look to the 2008-09 recession as a possible benchmark for what is about to unfold. Chart 1 (see https://www.ifs.org.uk/publications/13302) begins with putting the 2008-09 Great Recession into historical perspective. It shows the growth of GDP per capita each quarter relative to the start of each major recession in the last one hundred years. While, the 1920-21 recession was deeper in the first year (noting that this took place in the immediate period after the post-WW1 flu pandemic of 1918-20 which killed between 20-40 million worldwide), the UK economy recovered to its pre-recession level after around 4½ years (18 quarters). However Chart 1 shows the 2008-09 recession impacted for over 7½ years (30 quarters). Given the comments of the OECD and IMF, this suggests the UK is facing perhaps a decade or longer to make-up ground on what is likely to unfold in the next few months. 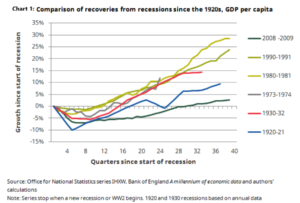 Chart 2 uses a slightly different ONS dataset (see ONS 2020a, 2020b) to show the impact of the 2008-09 financial crisis. Labour productivity was growing at around an average of 1.96% p.a. during 1990-2007, and following the recessionary dip the trend has been closer to 0.5% p.a. on average. Thus, Chart 2 shows the extrapolation of what would have happened to productivity if the 1990-2007 trend had continued; by the end of 2019 a gap of around 17 percentage points had emerged in what might be considered ‘lost’ productivity in the UK economy.

Chart 2 also shows the two series that make up labour productivity (output per worker); the drop in productivity post 2007 was mainly due to a fall in the production of goods and services (as is typical of all recessions), accompanied by a much smaller fall in employment. Thus, what was different about the 2008-09 recession was the ‘hoarding’ of jobs relative to previous recessions, such that it has taken productivity much longer to recover to pre-2008 levels. 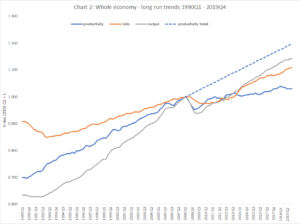 Chart 3 makes this clearer by taking just the recessionary period shown in Chart 2. Here can be seen the shallow dip in employment and its levelling off before a slow growth back to pre-recessionary levels, while output fell by significantly more and only returned to its pre-recessionary level in 2013 Q1. Consequently, productivity only fully recovered to pre-2008 levels by 2012 Q3, i.e., 4½ years (18 quarters) later.

Chart 4 shows this same recessionary period in terms of growth rates (Chart 3 is in levels); it is comparable to Chart 1. It re-emphasises that losses in productivity were mostly caused by output falls not compensated by cuts in employment. As stated above, this was somewhat unusual in that most recessions see the immediate fall in output later matched by employment falls, with the latter typically then having a greater ‘depth’ and lasting longer.  Indeed, many firms use recessions to ‘cleanse’ inefficiencies and introduce new (often labour-saving) technologies. In short, recessions typically impact in the short-run by reducing labour productivity, but in the long-run introduce structural changes that increase economic resilience. This did not happen post 2008-09. 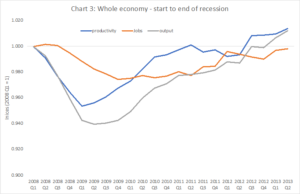 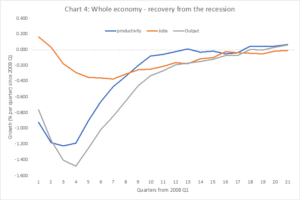 Will the current crisis be like the 2008-09 recession or more typically follow earlier patterns where productivity levels recovered much faster (and usually to pre-recession trends)? Given that the immediate response of government has been (understandable) supply-side measures to try to protect jobs (through employment subsidies), and given the dramatic fall in demand for certain service sector industries (such as the distribution, transport, and accommodation & food sectors), it seems very likely that employment levels are likely to receive greater ‘protection’ than the production of goods and services, and the trends seen in Charts 1-4 are more likely to be repeated in productivity terms (albeit with greater negative consequences).

Indeed, Chart 5 shows what happened to productivity in the production (with construction) vis-à-vis service sectors, while Chart 6 shows separately the results for 5 sectors that were particularly ‘hard hit’ by the 2008-09 recession. The production sector took a larger hit earlier on, but recovered faster, while it took services much longer to return to pre-2008 levels. Chart 6 shows that in especially the arts & entertainment sector and transportation services, there was still an important gap over 5 years after the start of the recession (together with the fall in productivity having been much more severe in these sectors). Charts 7 and 8 show that most of the change in productivity was the result of output changes (while jobs were largely maintained at pre-recession levels, or saw only relatively small declines which recovered more quickly – that is, similar to the pattern shown in Charts 3 and 4 for the whole economy). And output only recovered to 2008 Q1 levels in 2013 Q3 for distribution (i.e., 5 years later), while it took until 2014 Q3, 2015 Q1 and 2019 Q1 for arts & entertainment, accommodation & food, and transportation services, respectively (an average of nearly 9 years for these sectors as a sub-group).

The impact on the world economy of the current world pandemic is predicted to be severe, perhaps 2 – 3 times more severe than in 2008-09. Using the 2008-09 recession as a guide of what might happen, where labour productivity moved to a new, much lower growth trajectory, and took a much longer time to recover to pre-recession levels compared to recessions that took place in the 20th century, it seems likely that the UK will follow the same pattern as post-2007 but with deeper ‘cuts’ in productivity and a longer recovery time to follow. In part this is because the government (for clear and obvious reasons) is seeking to protect employment levels, which is the main feature of what happened to productivity following the financial crisis in 2008-09. Sectors like construction, distribution,  accommodation & food, transportation services, and arts & entertainment are likely to face the brunt of what is about to impact on the UK (and world) economy. 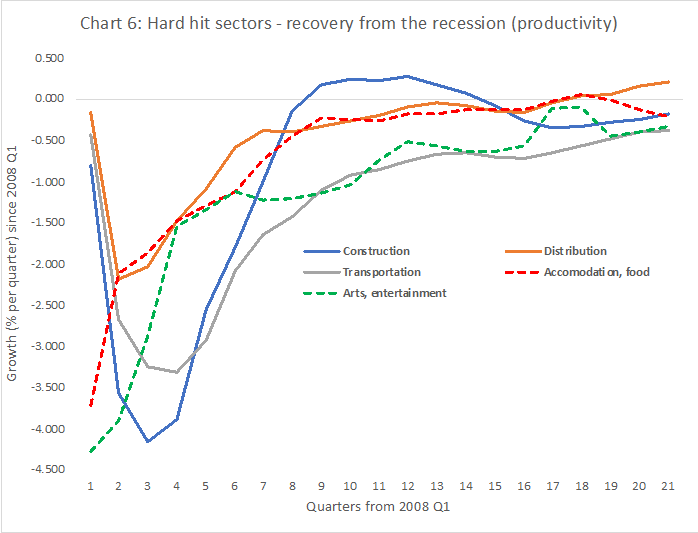 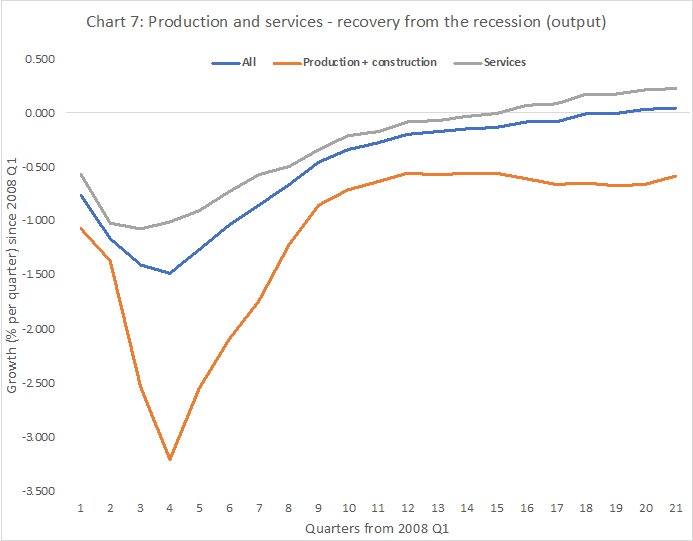 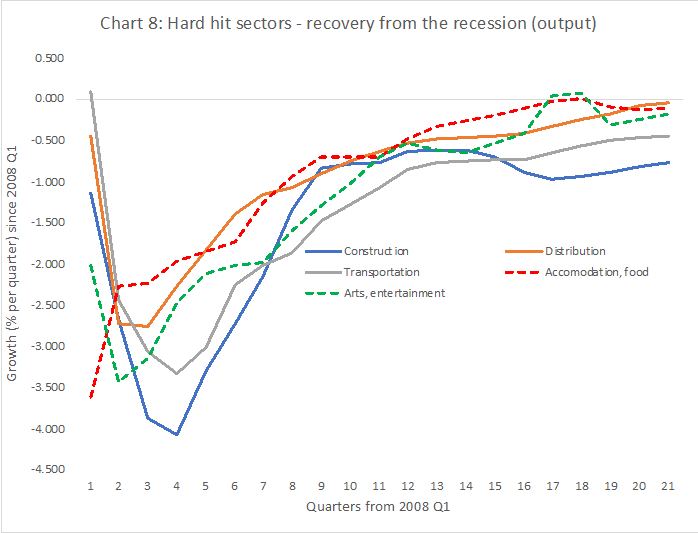