Policies to foster jobs, innovation and productivity typically set SMEs and start-ups centre stage. This is not surprising. On average, SMEs account for about 70 % of jobs and 50-60 % of value-added in the OECD area (OECD 2017).[1] Young firms and start-ups are also shown to create a significant fraction of new jobs and they often play an important role in driving innovation and experimentation with new technology and business models. Accordingly, SMEs and start-ups are often the main policy targets. Promoting SMEs to grow and scale-up and stimulating new entrepreneurial and innovative firms are high on the policy agenda in virtually every OECD country.

But even if SMEs and startups are a main policy target, it is important to avoid a too one-sided focus. The fact that young firms and startups are the most important in terms of e.g. direct net job creation, does not mean that other firms are unimportant. For example, the entrepreneurs that start and run these firms come from somewhere and may have gained their managerial skills, business knowledge or ideas while working in a large firm. Likewise, the local presence of established firms, such as Multinational Enterprises (MNEs), may be critical for SMEs to find people with the business experience or the knowledge of foreign markets that they need in order to expand and scale-up. Furthermore, many established large firms may be important customers for smaller firms as well as young firms. SMEs and startups do not emerge or operate in isolation but are part of an interacting system that includes large established firms. The industrial dynamics that drives innovation and productivity is in fact characterized by a significant interplay between large firms and new entrants as well as SMEs.[2]

As a case in point, we have analyzed the question of where new firms that survive and grow come from in the case of Sweden.[3] This is an issue of importance because new firms are highly heterogeneous and most firms exit shortly after they are founded or do not grow. Still, the positive effects of startups on the economy appear to be largely attributable to new firms that survive and grow.[4] Knowledge of from where such firms come helps our understanding of the relevant contextual factors in new firm formation that drive jobs and productivity. Our findings suggest that in Sweden, large established firms, in particular MNEs, are an important source of new successful firms. Furthermore, the dynamics of this process typically play out at the local level.

First, we document substantial differences in survival across types of new firms. The figure below distinguishes between five types of new firms. Spinoffs are new firms where the majority of employees come from the same parent firm. If the parent exited in the same year as the spin-off, the spin-off is classified as a pushed spin-off; otherwise it is classified as a pulled spin-off. Non-employed are new firms created by people that were unemployed prior starting their firm. Divestitures are large new firms assumed to be reorganizations of activities that previously took place at an incumbent firm. Other new firms is a residual category. 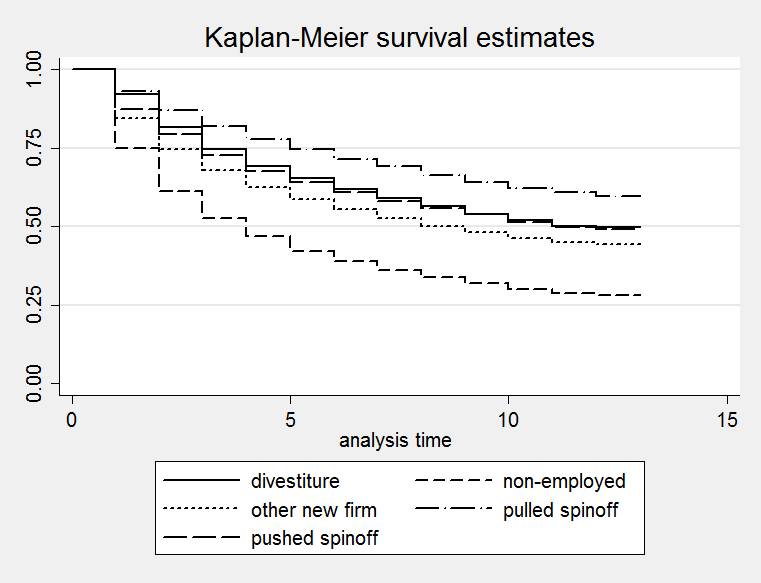 What is clear from the figure is that pulled spinoffs systematically outperform all other types of new firms in terms of survival and that the pulled spin-offs stand out as the best performers; firms with all employees previously unemployed stand out as the worst performers; with pushed spin-offs and divestitures performing somewhat better than other new firms. Divestitures aside, spinoffs show the highest survival rates among all types of new firms.

Second, our econometric analyses further show that even after controlling for several characteristics of new firms, such as initial size, human capital, industry, we find that spinoffs still show significantly higher survival rates as well as employment growth. Another result is that spinoffs with large parents and that are MNEs also perform better, which may reflect the fact that MNEs in general have richer tangible and intangible resources that founders of spin-offs can draw upon.

The data we used in these analyses also illustrate that the spinoff process is highly localized in space. The table below presents data on the fraction (in percent) of spinoffs in Sweden during the period 1993–2005 that locate in the same municipality and region as the parent firm. The original data are based on 15,103 spinoffs with two or more initial employees.

Fraction of spinoffs locating in the same municipality or region as the parent firm.

Taken together, these results suggest an important relationship between existing firms and business dynamics through entrepreneurship. Much empirical evidence speaks in favor of the argument that large resourceful firms, such as MNEs, may play a significant role in the local eco-system of entrepreneurship for example by (involuntarily) acting as “anchor-firms” that accumulate and train human capital in a region. Policies aiming to foster local productivity and job creation should recognize the indirect role that established firms play in the entrepreneurship process. A too narrow focus on SMEs alone misses much of what is crucial.