Assessing the impact of shareholder primacy and value extraction: Performance and financial resilience in the FTSE350

Image created by Kat Sloan via Canva based on Authors data.

A new report by Professors Adam Leaver and Richard Murphy of Sheffield University Management School and Prof Colin Haslam and Dr Nick Tsitsianis of Queen Mary, University of London, examines the investment and productivity performance of large UK listed firms who make outsized distributions to their shareholders. This report builds on their earlier work (Baker et al 2020) which found a significant minority of large US based corporations made shareholder distributions in excess of their declared income earned over a ten year period.

Their project examines accounting information from 182 companies who were members of the FTSE 350 index in every year between 2009 to 2019. Those companies were ranked according to the ratio of paid out dividends and share buybacks to their declared net income attributable to shareholders over that period. They were then grouped into quintiles and the investment and productivity performance of those quintiles were then analysed. 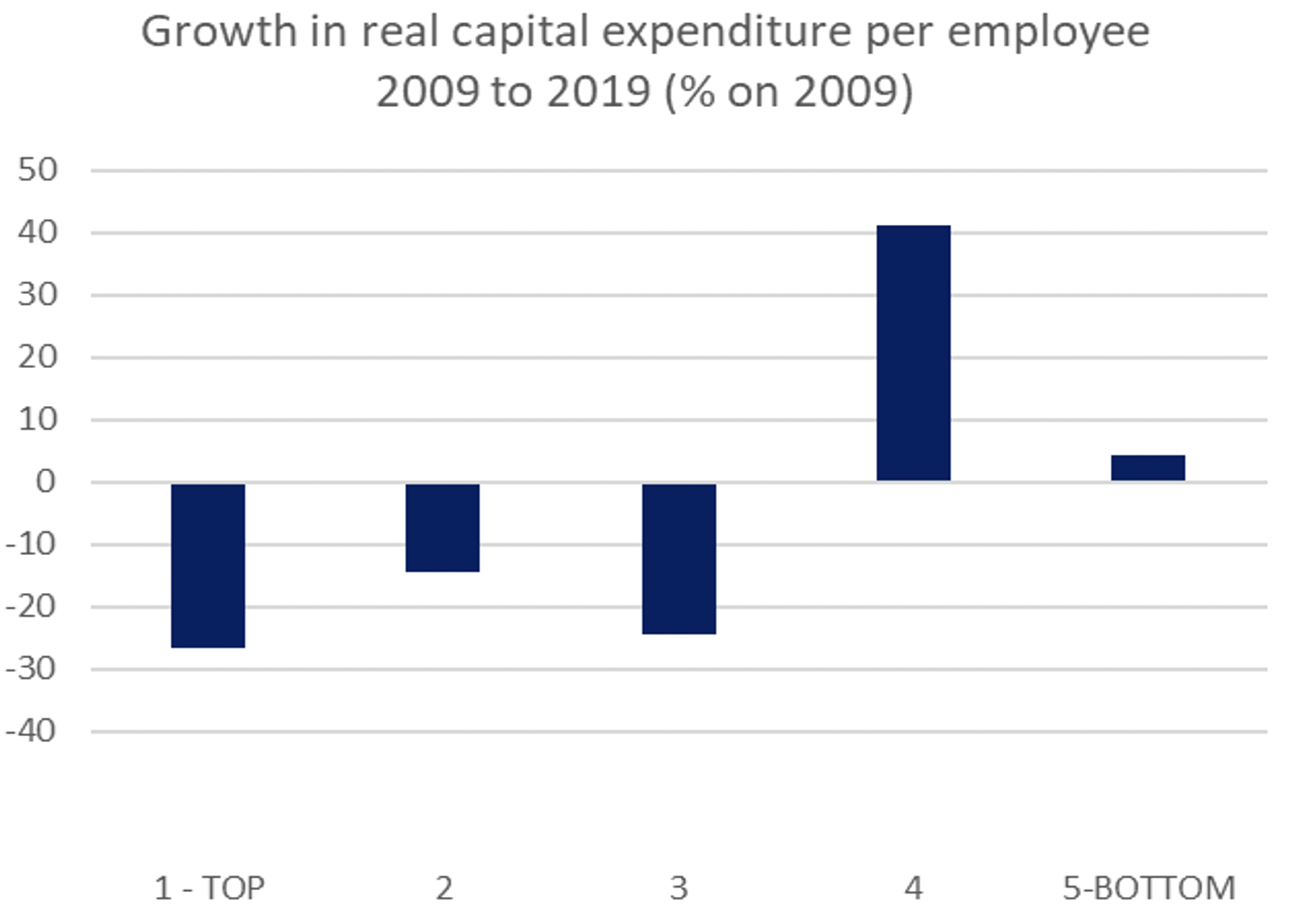 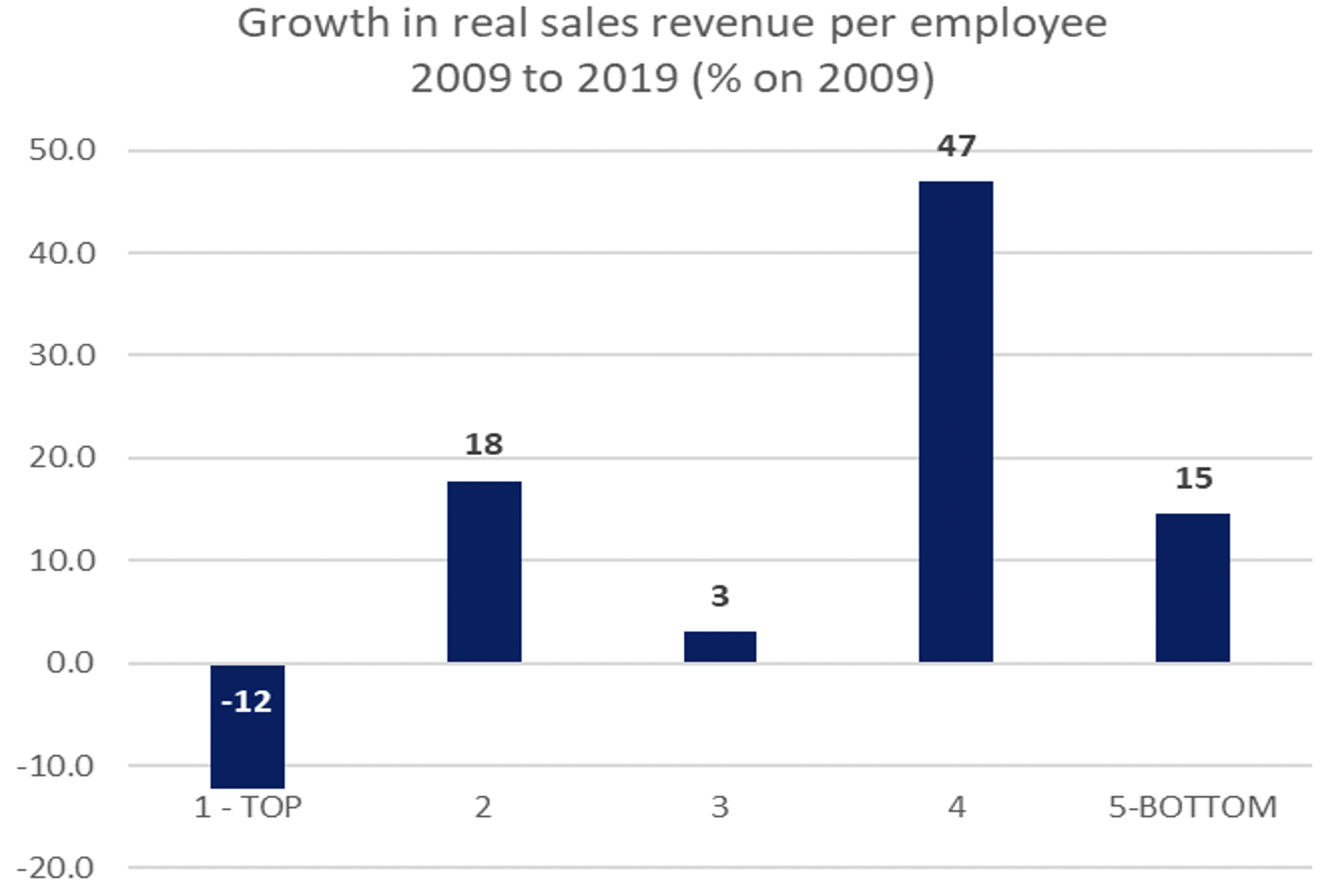 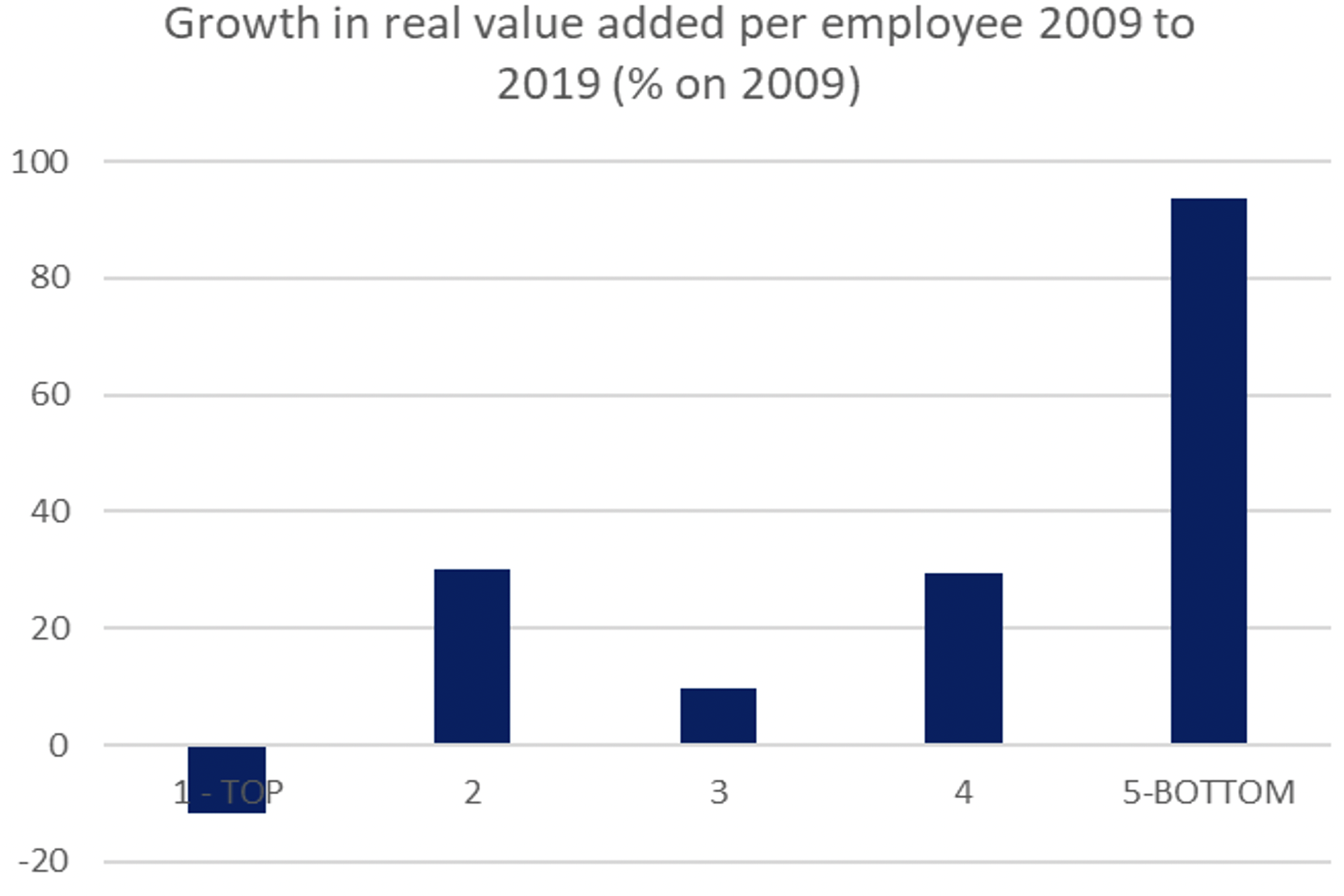 Broadly similar trends were found over a number of other indicators. For example, average margins and average return on capital employed ratios were also lower for the highest distributing firms over the decade 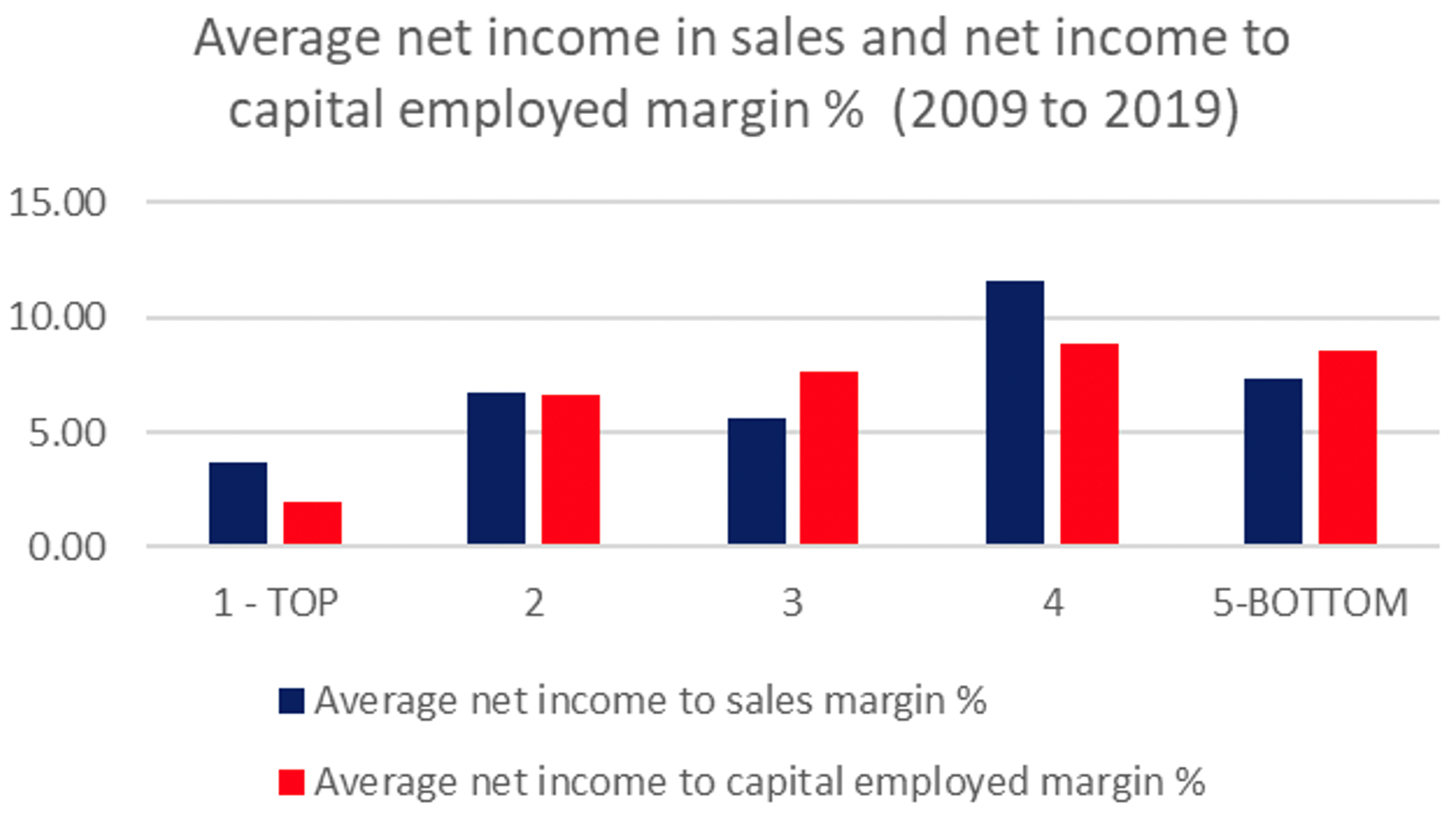 At the same time the researchers note that those companies that distribute most or all of their earnings might also carry greater balance sheet risk. Gearing is a measure of the long-term debt of the company as a ratio to the shareholders’ funds invested in the entity. The more debt there is, the higher the risk in the company. In 2019 these ratios for the 182 companies surveyed were as follows, ranked by the same quintile groups: 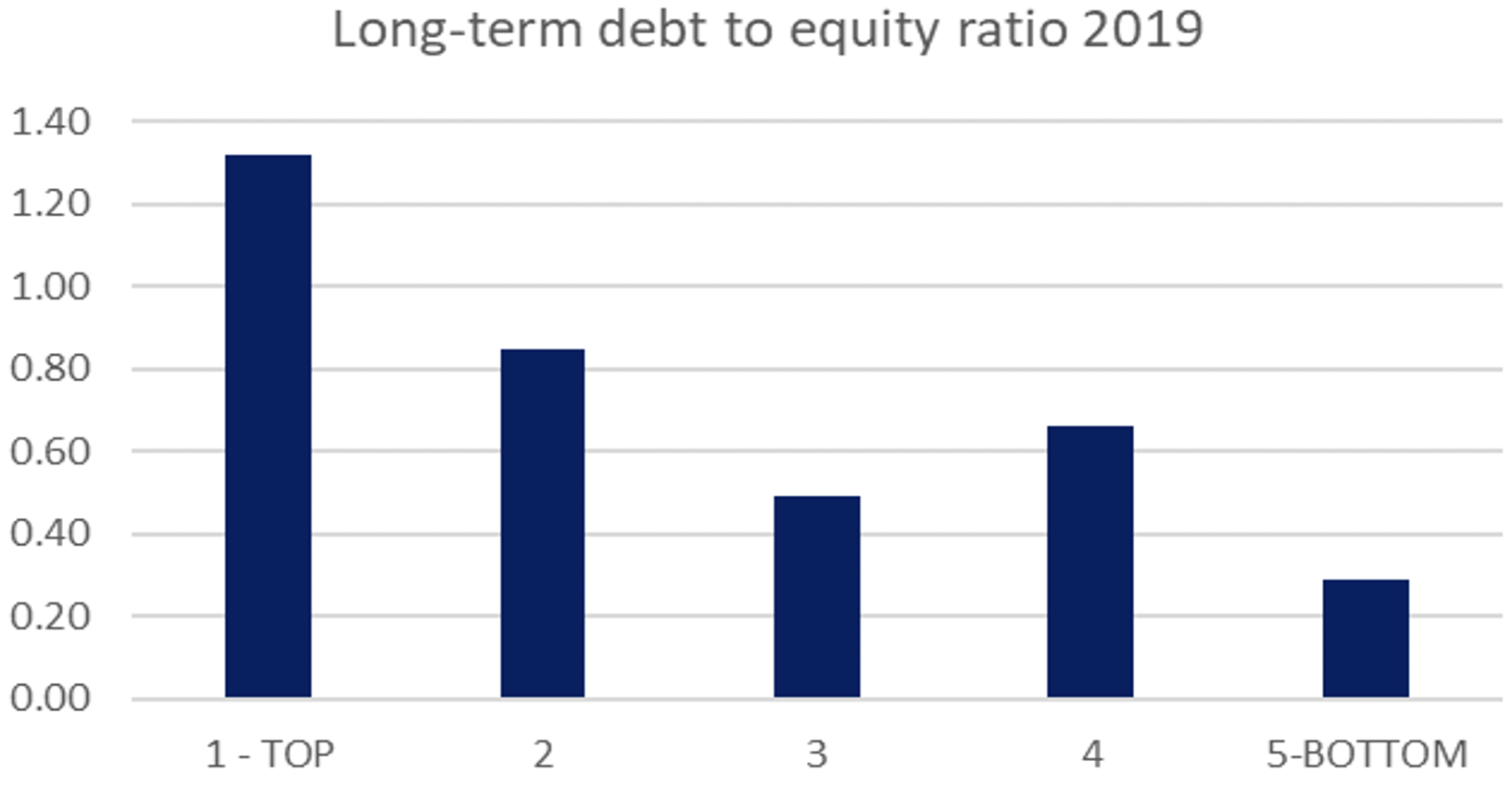 It is generally accepted that the higher a company’s gearing ratio the risker its balance sheet is. This risk from borrowing is exacerbated if the funds that are borrowed support assets which are more speculative in nature. Goodwill is arguably the most significant speculative asset on many balance sheets because it is arguably more prone to impairments. Goodwill arises when one company takes over another and pays more for that company than the book value of their identifiable assets. The excess sum paid – or goodwill – represents the value of the exceptional cashflows that the acquiring group expects to make as a result of buying the enterprise. Impairment happens when it is decided that the valuation of goodwill can no longer be justified because the acquired company isn’t making the anticipated profits. The research undertaken shows that the highest distributing companies also have the highest amount of goodwill relative to shareholder equity, leaving them more exposed to impairment risks: 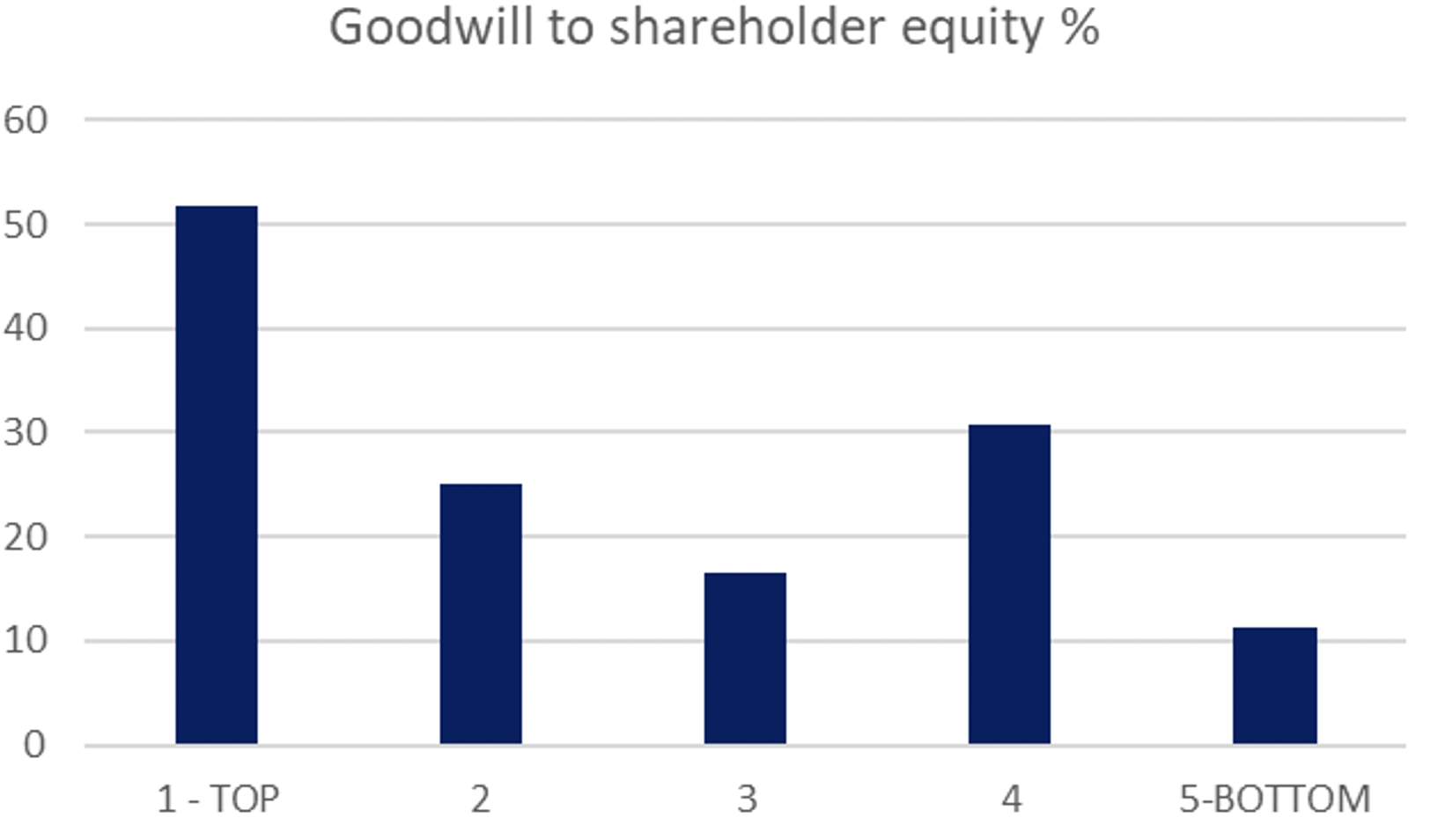 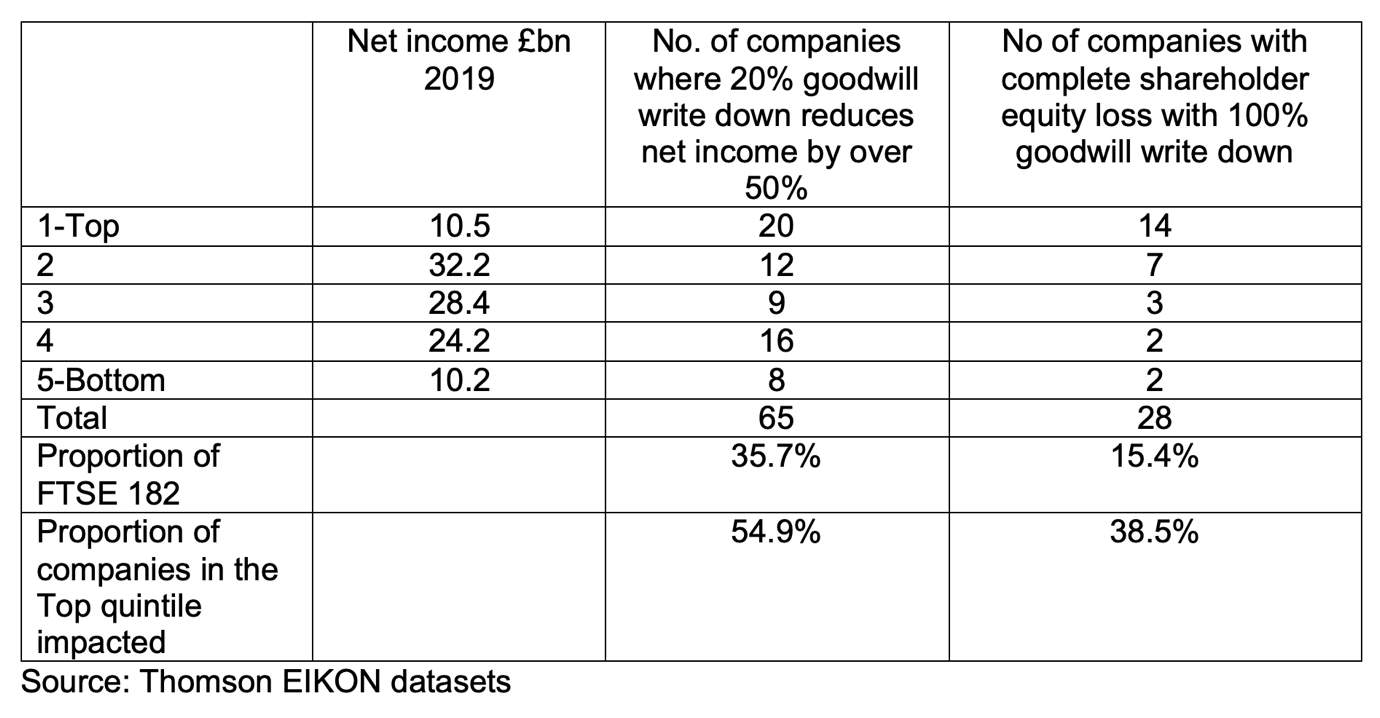 35.7% of all companies in the sample face serious impairment risk and 15.4% of companies, would face the entire loss of their shareholder equity if their goodwill was to be written off as a result of impairment provisions. Both ratios are, as noted, much higher amongst the top group of distributing companies, suggesting that there is much greater risk in this group than the others surveyed.

The report then explores the variable performance of the top 20% of highest distributing firms more granularly, noting sectoral variations. It identifies particular weaknesses in large outsourcing firms, who distribute aggressively, have low levels of productivity growth, invest little, generate thin margins yet carry a lot of debt and goodwill.

A number of implications follow from the report. First, there is a sizeable minority of large UK firms who distribute more to shareholders than they generate in net income. This suggests a more financialized corporate world where financial engineering and creative accounting play an enlarged role. Second, there is a growing dislocation between the ‘firm identity’ of a company i.e. its social and technological activities and relations, and its ‘corporate identity’ i.e. its reporting and legal personality, with the latter being prioritised by some Boards to pay rewards in excess of those that the underlying entity appears capable of supporting . Third, if shareholder returns can be met from financial engineering and creative accounting practices, as this implies, this may divert corporate efforts towards representational rather than operational concerns, crowding out investment-led productivity-enhancing strategies. Fourth a closer examination of the outsourcing sector may be necessary to explore the extent of these practices and its relation to the UK’s productivity malaise, particularly when public procurement is estimated to account for 12-13% of UK GDP. And fifth, those seeking long term value in stock markets may need to be aware of these structural and behavioural differences which the research shows can exist between firms and sectors.