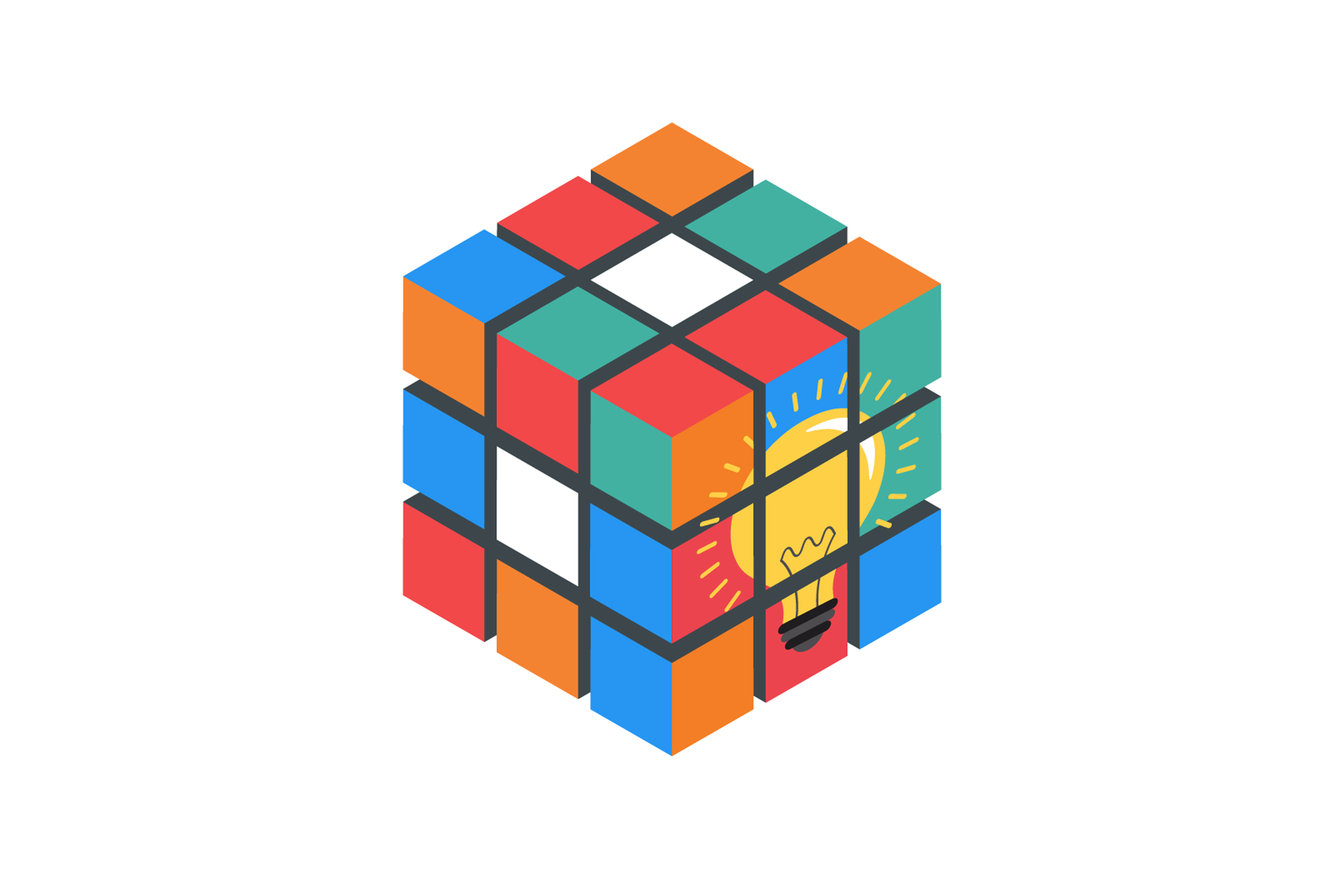 Getting People In Place To Sustain Productivity Improvements

The productivity puzzle is often couched in complex statistics, endogenous and exogenous variables, and the variety of policy levers that might or might not impact on our national wealth. It is at least clear that there is no simple silver bullet. The Productivity Insights Network is gathering new insights on the different components of the puzzle.

At City-REDI, we successfully bid for small project funding to revisit a programme which had tested different ways to engage employers in the productivity debate and ways to improve management skills and workplace practices. The UK Futures Programme (UKFP) was run by the UK Commission for Employment and Skills (UKCES) from 2014 until its closure in 2016. The UKFP tested innovative ideas with industry to test ‘what works’ in addressing workforce development and productivity challenges. UKCES co-invested £4.4m over two years in 32 projects across five so-called ‘productivity challenges’, each focussed on a specific labour market problem hampering productivity and growth, including Progression pathways in the retail and hospitality sectors and Developing leadership and entrepreneurial skills in small firms through anchor institutions.

A short-term evaluation, published in 2016, identified a series of policy implications arising from the UKFP, but small project funding from the Productivity Insights Network offered an opportunity to explore whether the projects had sustained success over the longer-term and if so, how and why.

Our evaluation study comprised interviews with ten project leads, taken from the Retail & Hospitality and Local Anchor Institutions challenges and further interviews with beneficiary or partner employers in five of those projects. Interviews were conducted between October 2018 and January 2019.

Sustained activity, in some form, was found in nine of the ten projects examined. This was not at the same scale or intensity as during the funding period, but:

• tool-kits developed during UKFP were available and marketed to a greater or lesser extent; and

• learning was being transferred to other programmes.

People and relationships were at the core of sustained activity. We found high levels of staff churn in the Retail & Hospitality sectors which impacted on continuity of learning. More sustained staffing within local anchor institutions enabled products or ideas to take root. The evaluation pointed to the importance of different types of people:

• Project Champion – the strategic lead, usually the idea generator within a business or intermediary organisation;

• Project Manager – the operational lead, usually funded by the UK Futures Programme and usually no longer in place when funding ended;

• Managers at all levels in a business are critical in the sustainability of a product or idea by ensuring it is embedded in firm strategy, ethos and practice;

• Project Pioneers – ‘testing’ was a fundamental requirement of all projects in the UK Futures Programme. In most projects ‘Project Pioneers’ were involved in the early testing or early adoption of a product or service and who sometimes were also used to help with wider dissemination of changes in practice.

Not all four needed to be in place for sustained activity, but it was clear that each group played an important role and weaknesses were apparent in the absence of any one of these groups of actors.

For example, in one case a Project Champion maintained an ambition and ability to apply for other funding even though there was not a Project Manager in place after the initial funding ended to enable continuous development in the meantime. In another case, while new improved recruitment practices were still in place, turnover of Managers and Pioneers led to questions as to how embedded the change was: Had it impacted on organisational culture? Did new Managers really understand the purpose of the practices introduced?

People also played a fundamental role in the initial engagement of employers. Trusted local anchor institutions adopted a relational approach to engagement of individual businesses. Small employers were persuaded to consider their leadership skills by larger firms. Project Champions could galvanise employers where there was a mutual benefit – for a sector, for a local area, or in a supply chain relationship. Pre-existing local relationships and reputations were critical in initial and sustained engagement.

But relationships also needed funding. Without the funding for a Project Manager to maintain networks, even pre-existing relationships are not necessarily strong enough to tackle the complex issues surrounding productivity improvements on a sustained basis.

Some of these issues may seem difficult to tackle from a policy perspective. Whilst many of the features of the UK Futures Programme seemed to be well received, the end of funding left many projects unable to make further progress. A potential solution to this is to be more realistic in the time it takes to address these problems. None of the projects examined had initial funding for more than 18 months. Longer-term funding for a Project Manager, dependent on achievement of goals detailed in a logic chain demonstrating potential for impact on enhanced workplace productivity, could have enabled some of these projects to develop further – for instance by sharing staff and enabling progression across firms, keeping skilled and talented staff within a sector, etc.

The longer-term evaluation of  the UKFP as a whole, leads us to suggest that a series of place-based rolling reflective learning projects, with ongoing evaluation and dissemination and involving organizations with aligned goals might be one way of helping address productivity deficiencies. These projects need to be supported strategically by a trusted Project Champion (in a respected intermediary/ employer organization) working alongside advocates in senior positions in beneficiary organizations who can provide employer leadership. While this does not preclude staff churn, it may provide some insurance and reduce the unknowns in the productivity equations. 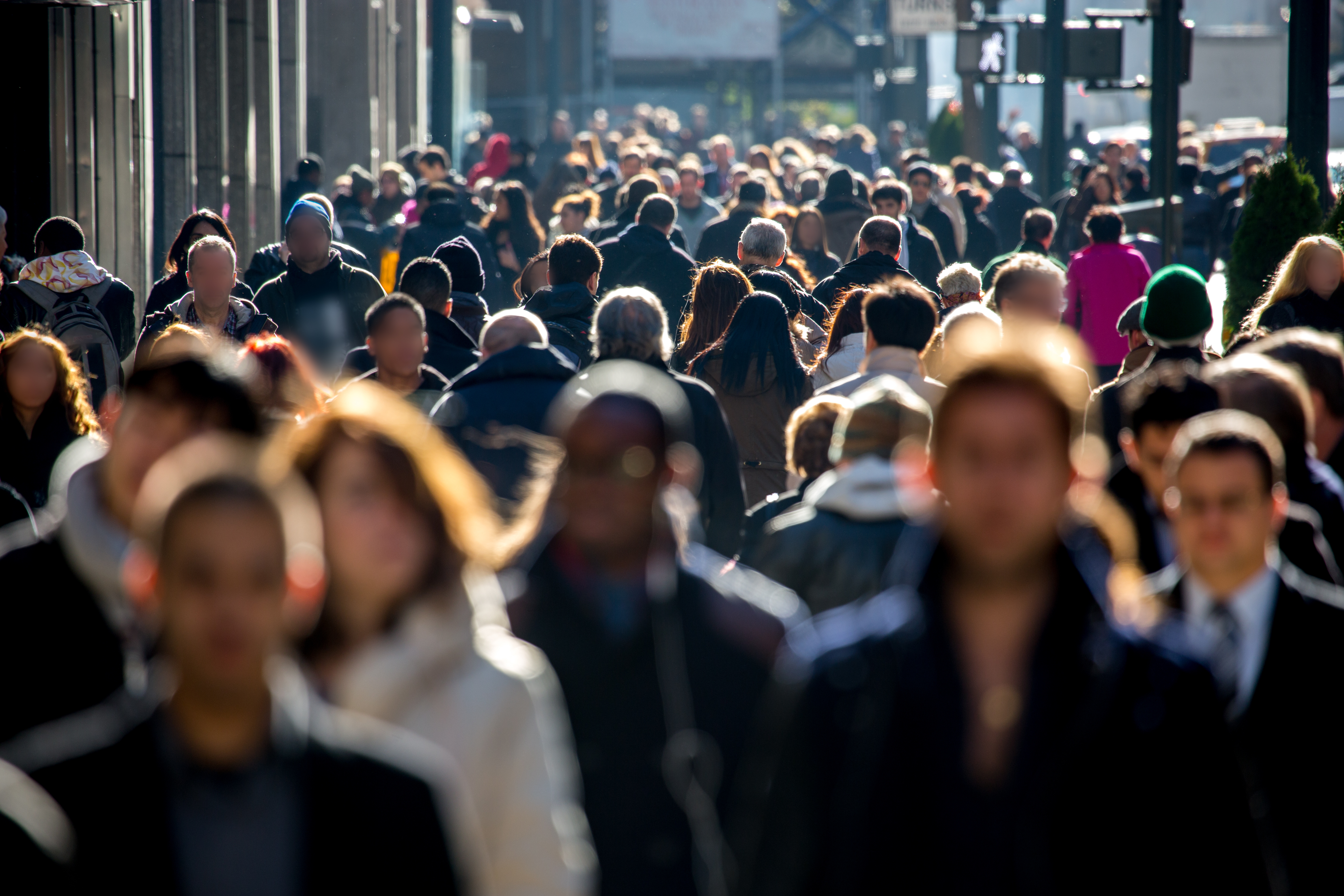 The meaning, measurement and importance of productivity to UK firms

Summary of research from the CIPD Winter 2018 Labour Market Outlook

In 2014 the CIPD surveyed human resources leaders on the meaning, measurement and importance of productivity. This culminated in the report Productivity: Getting the best out of people. Since this time UK productivity has barely moved. We therefore revisited the questions to explore how far employers have internalised the national productivity challenge.

Businesses employ numerous measurements and KPIs from financial ratios to measures of customer satisfaction. Measuring productivity is easier for some than others and we find large differences by industry. It is much easier to measure the value of a car that is openly traded in the market than a teacher’s lesson. This probably explains why only 51% of education sector organisations measure productivity compared with 72% in manufacturing and production.

Businesses that use the term productivity often when discussing performance are much more likely to also have measurements for productivity.

Is productivity a priority?

Improving productivity is a middle-ranking priority for employers. However, objectives that are more common, such as managing costs or improving quality of service, are likely to improve an organisation’s productivity. 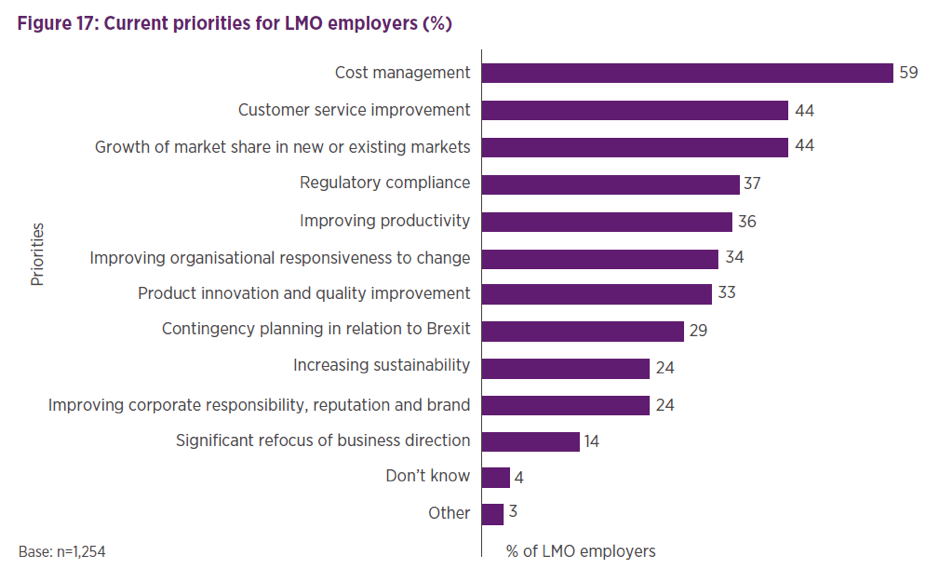 Perhaps businesses are not prioritising productivity because they do not perceive it to be a weakness. When asked what their productivity performance was relative to their peers, 88% believed their organisation to be average or above. Taking out the ‘don’t knows’ (5%) leaves just 7% of employers who believe their organisation to be below average. Few employers believing they are below average could be a recipe for inertia.

The importance of people management

‘Among the four broad management practices categories, we find that practices relating to continuous improvement and employment management – such as those relating to promotions, performance reviews, training and managing underperformance – were most correlated with productivity.’

The ONS research suggests that increasing the quality of structured management practices, particularly those relating to the management and development of people, could boost firm-level productivity and help tackle the long tail of underperforming businesses in the UK.

Given the ONS research we also looked at the prevalence of key formal people management and development practices, also known as high-performance working (HPW) practices, and their links to firms’ attitudes to and awareness of productivity.

Naturally some practices, such as having an equal opportunities policy (70%), are more prevalent than others, such as Investors in People accreditation (17%). But, for every single HPW practice considered, organisations that said they have HPW practices in place were more likely to say they are measuring their productivity. 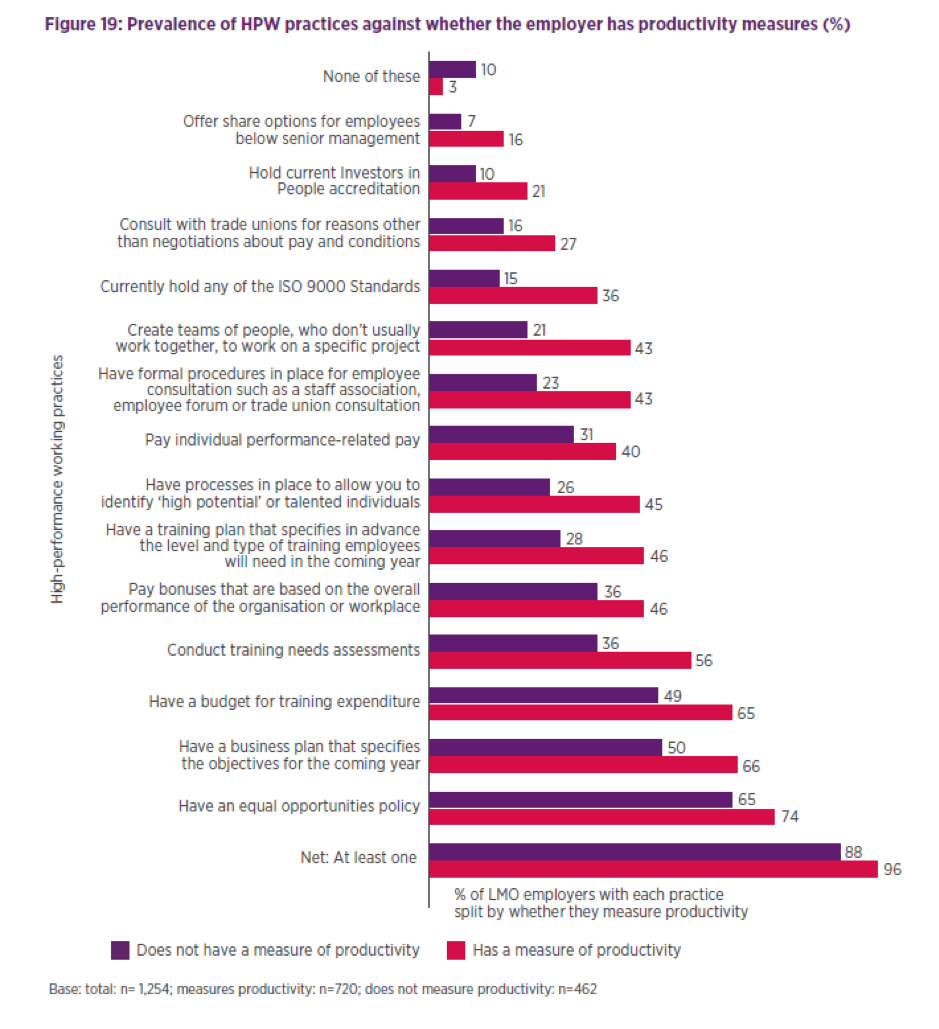 Many employers live and breathe the language of productivity, but many do not. There is a strong call to action here. The challenge is to convince employers and employees that productivity isn’t a distant academic concept, but something within their reach. To do this we must continue research into firms attitudes and awareness of the issue. What are the barriers real or perceived to the firms in which productivity is not a priority, and that neither measure nor use the term? We must then trial real interventions in businesses. The finding that management practices and, in particular, people management practices, may hold the key gives businesses of all sizes and industries a place from which to start. One example of such an intervention is The CIPD’s People Skills Two project. Building on a successful pilot in 2017, the project is putting HR consultants into small businesses to improve the capability to develop good people management practices. With robust evaluation, projects like this develop our knowledge of how to tackle the productivity challenge.