An earlier version of this blog is available on the author’s personal blog.

Highways England has recently announced a £300,000 study that is to look at the improvements to the road links ostensibly linking Preston and Leeds Travel-to-Work Areas (TTWA). The study as the Transport Secretary Chris Grayling has put it[1]

… is part of our ongoing work to ensure the routes between Lancashire and Yorkshire are fit for the future – helping link communities better and boosting the economy to supercharge the Northern Powerhouse.

The announcement does make references to the importance of the East Lancashire-Yorkshire corridor to the freight traffic of the industries there. That being said, as with the original plans for the Northern Powerhouse, the choice of cities and regions to be connected, be it via road or rail, can appear arbitrary and the growth- and agglomeration-related language raises a few questions.[2] Put simply, we tend to believe bigger cities to be more efficient with their resources and more productive economically.[3] This boils down to the ability of cities to facilitate and maximize interactions between people ‘boosting the economy’ such that the per capita output of the city increases with population. This is mainly why the efforts aimed at addressing the economic performance gap between the North and the Southeast have focused on connecting major urban centers in the north, at least as far as transport strategy is concerned. These inter-city transport links are seen as a way of constructing a virtual city in the North that has the size of London and hence improved productivity and efficiency.

When it comes to the perceived powers of urban agglomeration, however. there is fine print involved. From a theoretical perspective, for cities belonging to a given urban system – say that of the UK – we would expect to see a balance between the cities’ economic output and what they pay in terms of the costs of moving people about in the city to enable those economic returns – a size-cost balance if you will.[4] As a function of the cities’ density and productivity, this size-cost balance would look something like this. 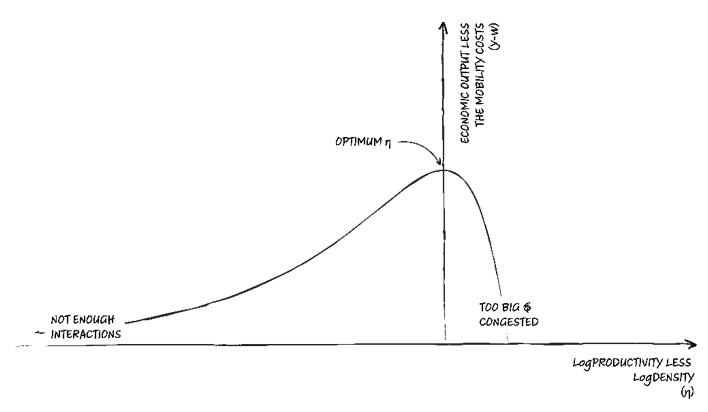 We would then expect our cities to have evolved over time – think many decades – so that they are, more or less, scattered over the  curve around that point of optimum . What is more interesting is the type of infrastructural/planning intervention a city would need to get closer to the optimum , if they happen to be a long way to either side of it. For cities that are located to the left of the optimum , the city suffers from insufficient interactions. These are cities that are not meeting their potential because their population do not enjoy adequate internal mobility. Climbing the hill to the left would then require providing such cities with better intra-city transit systems. 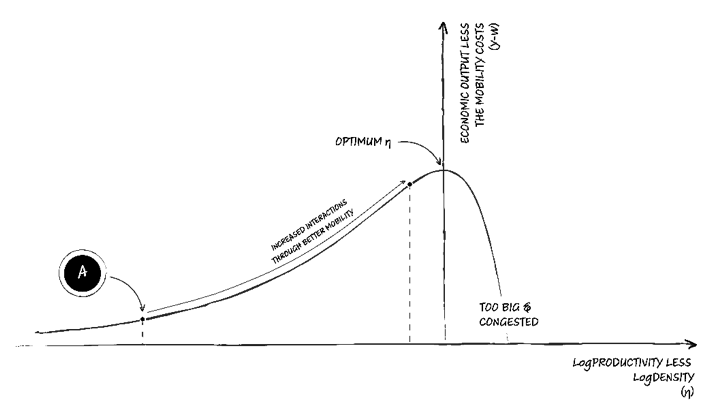 The cities to the other side of the hill, on the other hand, have usually grown too large because of their economic success resulting in an escalation of mobility costs. To minimize the mobility tolls while maintaining social interaction, these cities would then benefit from densification facilitating shorter-distance interactions more efficiently. 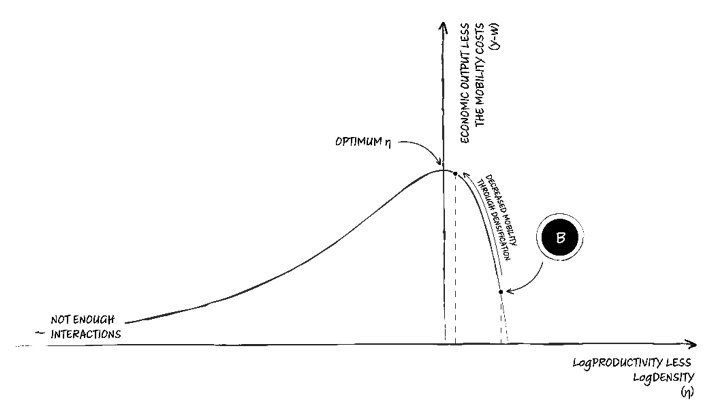 Examining infrastructure needs of cities in the UK from this perspective points to a systematic abundance of cities that are to the left of the performance hill and in need of better internal mobility and accessibility.[5] However, if we really insisted on going ahead with inter– rather than intra-city solutions, what the agglomeration-based inter-city transport arguments point to is the complementarity that exists between the needs of cities that are not realizing their potentials to the left of the hill and their counterparts on the other side of the curve. If two such units happened to be in one another’s neighborhood, then an adjustment of urban boundaries and provision of comparable transport between the two cities would help configure a metropolitan area that potentially performs better than the two initial units. 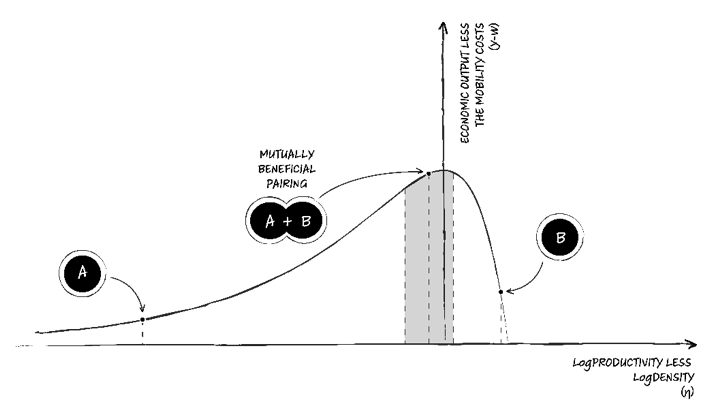 One thing to note here is that this mutual improvement on the original city units is not a given. It is perfectly possible to sacrifice performance balance from a particularly well-performing urban center to provide support for an ill-performing unit on the periphery. 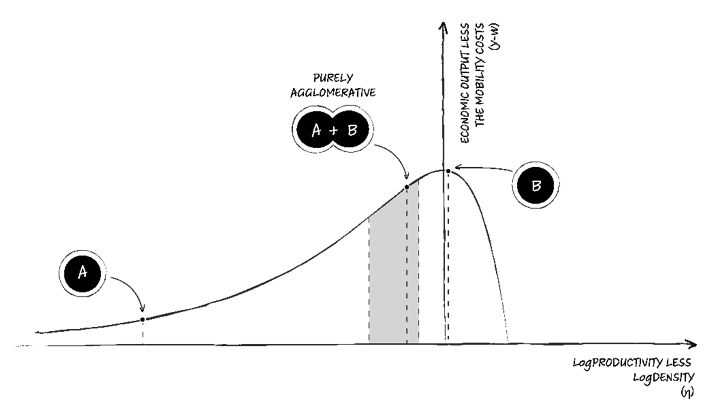 Going back to the choice of cities or regions to connect in the North, we can now make this implicit reasoning in the existing agglomeration arguments explicit and look at all the possible city pair combinations and pick the pair that delivers the closest performance to the optimum . This is exactly what we have done for all cities in England and Wales defined at various spatial scales and over various neighborhood distances.[6] So, how do our synthetic city-regions look when mapped? 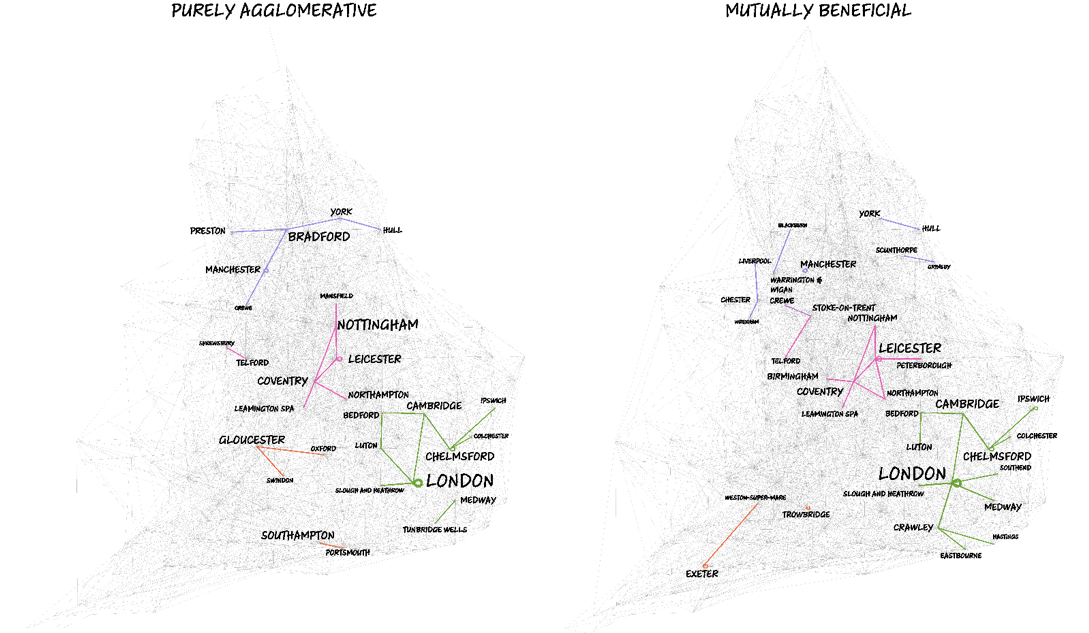 Both of the above maps highlight the top 1% most frequent pairings when aggregating various distances and definitions of cities onto the 2011 Travel-To-Work Areas. A keen observer would notice that of these highly frequent pairings, regardless of the overall method, quite a few show pairings of a city with itself – most prominently that of London but also those of Manchester, Leicester, Exeter, and Chelmsford. These effectively note that there are units that have the potential to be better linked while being situated in the same overall Travel-to-Work area. What we need to note right afterwards is that none of these TTWAs have an intra-city transport infrastructure comparable to the one overseen by Transport for London that does in fact provide the type of connectivity the framework is suggesting.

The other important take away from these maps is the observation that many cities – take Sheffield as a case in point – tend not to form recurring links with any one place. What is being highlighted in such cases is that many cities across the country have infrastructure needs that are very much unique to themselves. These places won’t readily lend themselves to inter-city region-building schemes as their infrastructural need, be it better internal mobility or increased density, is not complemented by any of their neighbors. Such units would benefit more from tailored infrastructure solutions that address their needs internally.

Finally, let us introduce a crucial constraint and focus on the Preston-Bradford area for brevity. Instead of aggregating at all distances looking at all possibilities, we can choose our pairings preferring closer pairs over those further apart unless there are no suitable pairs available locally. This allows us to gradually grow regions outward and build on existing proximities. The top 5% most frequent of these pairings across the Pennines look like this.

What we tend not see in these pairings are strong links between Preston and Bradford – note that it is only under the purely agglomerative approach and without our geographic constraint that we see a link between Preston and Bradford. This brings us back to what appears to be the arbitrary types of choices of regions to connect when considering transport projects to boost the economy.

The approach we have reviewed does in fact let us identify the infrastructural needs of city units across spatial scales. It does also provide a systematic way of identifying potential intra- and inter-city transport links. What it does not do, however, is provide a cost-benefit assessment that would gauge the cost of realistically implementing such transport connections versus the real-terms economic benefits they might provide. However, what this approach can do in a more systematic manner than Cost-Benefit Analysis is to help to set out a feasible set of options based on a genuine system-wide analytical framework rather than simply a project-based approach.