Management Practices and Productivity in SMEs

The context of the project

The stagnation in UK aggregate productivity growth in the past decade and a half has coincided with the growth of a new literature measuring “structured” management practices.

The former has led to much ink being spilt over what productivity is, how it should be measured and whether and how businesses understand it, or should measure it.

“It is a terrible word, as it leaves most people dazed and confused. Few are those who can define it and fewer still those who can measure it” Andy Haldane  Chief Economist Bank of England.[1]

Most discussions of the productivity slowdown, however, begin from a well-developed and widely understood definition of productivity. This is based on national accounting data. It divides  output measured as gross value added (GVA) by a measure of labour inputs (either numbers of employees or employee hours) (see e.g. Barnett et.al.(2014).[2] We consider whether this approach makes sense to, or can be used by, company management.

Quantifying structured management practices also raises definitional and measurement issues.  The current dominant approach is to use surveys to develop company level scales. These scales focus primarily on the extent to which a business has a consistent and integrated set of practices covering the recruitment, incentivization, review, promotion and dismissal of staff (see e.g. Bloom et al 2017).

We were also concerned that, while productivity is understood to be a desirable outcome and measurable at an aggregate level in policy circles, it may not be treated as a critical objective on which owner-directors of smaller firms base their business decisions nor be measured by them. In part, this is another manifestation of the lack of explicit emphasis on productivity, formally defined, among managers in general (see MacBryde et al PIN Report), and a belief that it cannot be readily measured in terms comparable with conventional national accounting practices. In the context of smaller firms, this is compounded by the wider set of motivations and aims that owner-directors have, compared to managers and directors in larger firms with more distributed ownership and formal systems of accountability

We therefore sought to ask whether or not companies are aware of their productivity underperformance and more generally whether they do, can, or should use productivity as a key performance indicator. We were also concerned to approach this question without using the word productivity itself given the contested nature of this term.

The national accounts approach to productivity has a straightforward interpretation in company accounting terms. Labour productivity can be approximated from standard profit and loss and balance sheet items and has been used in research based on company accounts data (see e.g. Faggio et.al. 2010)

Figure 1 provides a simplified presentation of how the GVA numerator in the productivity calculation relates to standard accounting concepts. GVA is sales minus the cost of intermediate purchases.  GVA is in turn the sum labour costs and gross profits (profits before deduction of interest taxation and depreciation). Profits after deduction of interest taxation and depreciation is then available for distribution as dividends or retentions. 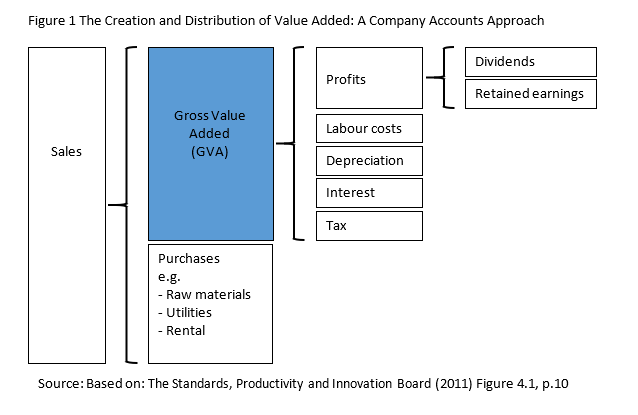 With this in mind we asked in our interviews and surveys whether managers used wages plus profits as a key performance indicator, thus avoiding the potentially confusing or “terrible” term “productivity”.

The disaggregation shown in Figure 1 also illustrates the limitations of using profits as a performance indicator. It is a partial measure of the efficiency of the company and is subject to distributional factors affecting labours share.

We would advocate the wider dissemination of knowledge, through for example company accountants, about using company accounts to approximate “productivity” measures at company level.

What we found out

The qualitative research showed that turnover is the most common business indicator used to guide business decision-making, but that others, such as year-on-year growth, are also used. Wages plus profits is almost never used as a measure. Particularly in very small firms offering advisory services, a combination of service offerings that are difficult to specify and measure, and business models based on extensive use of external associates and subcontractors, make the conceptualisation, measurement and management of productivity in these terms still more challenging. Structured management practices were not a prominent feature of the owner-directors’ approaches.

The pilot survey sample showed that the proxy for productivity – profits plus wages, divided by the number of employees or hours worked –  was rarely used as a key performance indicator and was even less likely to be rated as an important one. This is consistent with the qualitative findings. The pilot survey also showed considerable variation across companies in the use of particular indicators and in the total numbers of management practices used. Both of these were affected systematically by contingent factors. The number of practices used was strongly positively related to employment size and strongly negatively related to firm age in Services but there was no relationship in Manufacturing.

[2] The numerator, GVA, is the value of output minus the value of intermediate consumption and measures the contribution to GDP made by a sector or business. There are many possible refinements to the denominator in this approach e.g. adjusting for labour quality or adding capital inputs to the denominator to generate “total factor productivity” but the core GVA concept is the same (see e.g. APO/OECD 2021)

Office for National Statistics (ONS) (2017) Understanding firms in the bottom 10% of the labour productivity distribution in Great Britain: ‘the laggards’, 2003 to 2015 https://www.ons.gov.uk/economy/economicoutputandproductivity/productivitymeasures/articles/understandingfirmsinthebottom10ofthelabourproductivitydistributioningreatbritain/jantomar2017