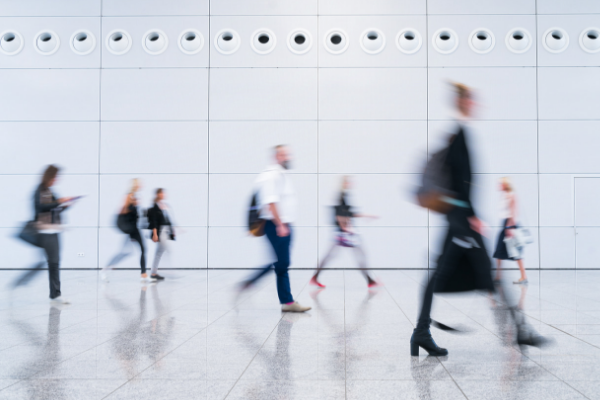 The existence of significant regional variations in productivity in the UK has become so established in academic and political debate it is taken as received wisdom, and so the publication of a report by Steve Fothergill and Christina Beatty (available here) that challenges this wisdom has understandably drawn wide interest. Over the past 18 months Productivity Insights Network has been working with BEIS and HM Treasury, as well as funding research, to rethink the productivity puzzle. A central aspect of our programme of work is the acute geographical nature of the productivity challenge faced by the UK. So Fothergill and Beatty’s somewhat controversial argument certainly merits greater scrutiny and review. Indeed it is increasingly evident that the answer to the productivity puzzle is not in the data, but reframing how the puzzle is understood.

In many senses more than a politically interesting (re)reading of the data, the report falls into the same trap as Chris Giles’s commentary piece on Britain’s Regional Divide – that is to say that the realities are more complex than presented. There is an issue with the way that the report draws on different geographical scales, including Local Enterprise Partnerships (LEPs) and NUTS 2 regions, which cannot reasonably be taken as comparable. Moreover, while the LEPs may be an appropriate unit of analysis for local political decision-making, they are not necessarily appropriate for understanding productivity variations, as some LEPs encompass very diverse areas (the Cambridge and Peterborough LEP being an obvious example). Arguably the report could have compared NUTS 2 regions across the whole of the UK, rather than relying on the LEPs in England, although this may have yielded different conclusions.

The perennial question of which productivity measure to use is also relevant in this report, although not discussed in detail. It is somewhat puzzling that Fothergill and Beatty start from GVA per worker, and then adjust for the distorting effects of demography, hours worked, and commuting patterns, instead of simply using GVA per hour worked, which is also the internationally-recognised best practice measure for productivity analysis. The use of GVA per hour worked would have obviated the need to control for age of the workforce, commuting, and other factors. The focus on commuting is also peculiar given that the key question in productivity policy is the workplace, rather than the residential location of workers.

The findings presented on the report were also peculiar in their focus on removing, rather than explaining, local sectoral composition. It is a long-standing and accepted approach of those engaged in productivity research to understand the differential contribution of different sectors to overall productivity growth. In much of the analysis contributing to the long awaited BEIS Productivity Review, comparisons across sectors are key. A disentangling of the reasons for the sectoral variations across regions, for instance, by comparing productivity in the same sector across regions, would have been helpful.

Related to this, it is puzzling to see a decision to capture the effective productivity of London workers, with the sectoral and occupational specialisation removed via a shift-share analysis. London is more productive precisely because it has a comparative advantage in specific high productivity occupations and sectors, that are located in London in order to benefit from significant agglomeration externalities. Relocating them to other parts of the UK, and expecting to observe the same productivity outcomes, is not a realistic prospect. It is worth noting, however, that other large cities outside of London do suffer from weak agglomeration externalities, and are underperforming relative to what we would expect (or punching below their weight)!

The Productivity Insights Network is all about challenging and changing the tone of the debate, however, this needs to be done in a robust and rigorous manner. The provocations from Fothergill and Beatty have generated media interest, although their conclusions appear to have confused rather than advanced the regional productivity debate. As opposed to spurious reinterpretations of productivity data, the emphasis needs to focus on solving the regional productivity puzzle. Better data at the regional level, particularly on regional price differentials, would help in addressing this gap. More than a market failure, flatlining and regressing productivity figures are better understood as a systems failure that needs to be addresses as such (see systems blog).  There is a need for new insights on how (sub)systems working nationally and regionally can be strengthened to improve UK productivity and reduce the regional inequality that has come to characterise the UK. 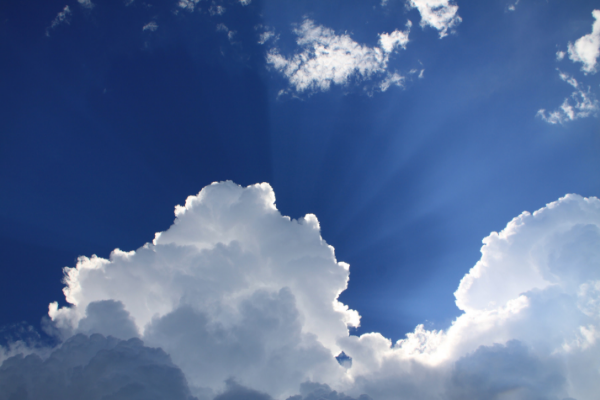 Solving the productivity puzzle: What is needed to support workers with common mental disorders stay at work and be productive after long-term sickness absence?

The University of Sheffield and the research-based consultancy Affinity Health at Work was in 2018 awarded one of four pioneer grants to answer the main research question of:

What are the resources that help workers with common mental disorders stay  and be productive after return to work?

Sustainable return to work for workers with common mental disorders (CMDs), such as stress, anxiety and depression, presents a major societal challenge in terms of scale and costs. In the UK alone, stress, anxiety or depression accounts for 44% of all ill-health related cases and 57% of all working days lost to ill-health in 2017-2018 (HSE, 2018). In total, 595,000 workers suffered from anxiety, stress or depression (new or long-standing) in 2017/2018 (HSE, 2018). Furthermore, according to the Labour Force Survey (LFS), 15.4 million days were lost due to work-related stress, anxiety or depression in 2017/2018. Recurrent sick leave is prevalent and 69% of workers with CMDs report that they accomplish less than they would like to (OECD, 2012). There is an urgent need to better understand how employees can be better supported to return to, and stay in, productive work.

What did we do?

We interviewed 38 workers who suffered CMDs and had recently returned to work after long-term sickness absence and 20 line managers who had experience managing workers with CMDs and their reintegration into the workplace. We interviewed some workers and line managers several times to understand how the need for support change over time. Based on our research, we developed a set of recommendations for what can be done to support returned workers be productive after they return.

How can returned workers be supported?

We developed recommendations for what individuals can do themselves, what their colleagues friends and family can do, what their line manager can do and what the organisation and Human Resource departments can do.

• Listen to yourself and your body: Do not lose a focus on the things outside work that enable you to build your personal resources such a healthy eating and exercise.

• Set clear boundaries between work and leisure time: Do not read emails or take the laptop home with you. If you find this difficult, schedule in time to relax, socialize or exercise.

• Structure your work day: If your work day does not have a clear structure, create your own structure, break assignments and projects into smaller tasks and set clear goals.

• Treat returning colleagues as you did before they went on sick leave.

• Let returned colleagues know that you are willing to help and you are there if they need help with their work, but do not insist.

• Continue to provide support in the long-term. Returned employees may take weeks or months before they are able to resume full duties.

• As a family member or friend, be available, but do not be judgemental.

• Agree with the worker at an early stage in their sickness absence period what needs to be communicated to colleagues, HR, occupational health and others. Do not disclose information agreed with the worker, even after return.

• After critical periods, make sure you follow up and signal that you are available and can help and support.

• Make sure you are familiar with the sickness absence and flexible working policies, are aware of where to find further information and support within your organisation, and facilitate the employee in using these policies to support their return.

• Allow for work adjustments and support and ensure that these are readjusted on an ongoing basis, if necessary.

• Allow for flexible work, be ready to extend part-time working if needed, and authorise work from home where possible.

• Be flexible in applying the flexible leave policy allowing workers to take holiday or unpaid leave at short notice, this may prevent relapse.

• Allow for accommodating absence policies to support the fluctuating nature of CMDs.

Click on the image below for the full report. 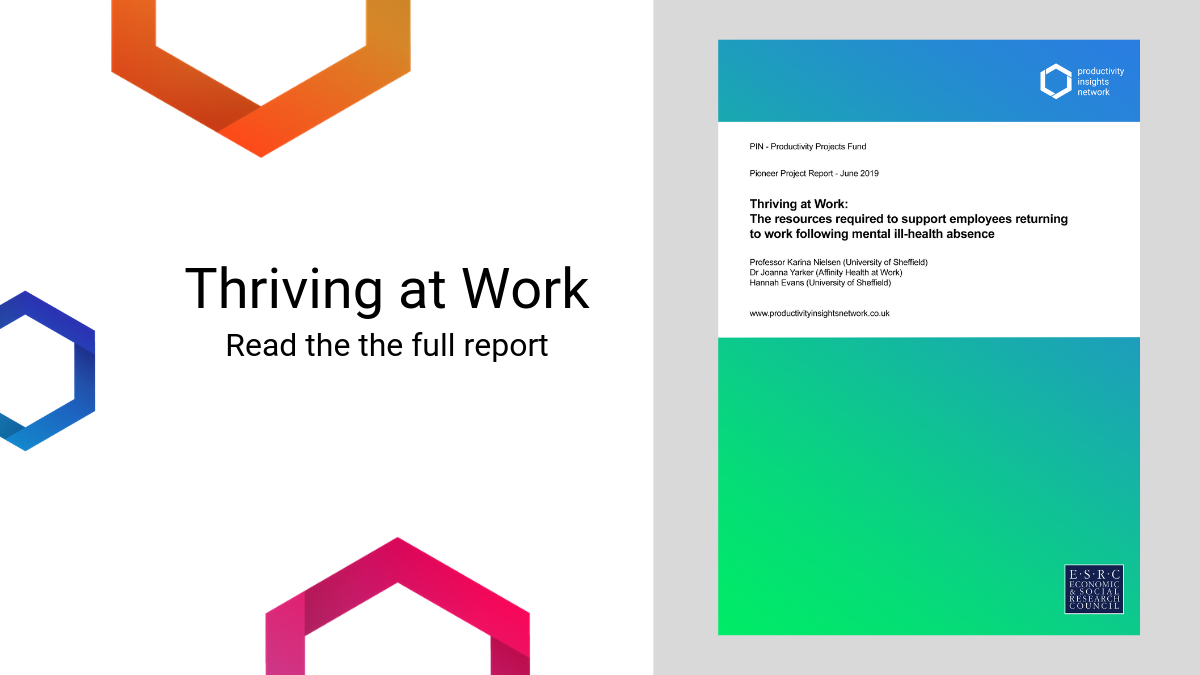