Getting rich slowly: how to achieve sustainable earnings growth

By Jonathan Boys
Labour Market Economist at the CIPD
j.boys@cipd.co.uk

”Compound interest is the eighth wonder of the world. He who understands it earns it… he who doesn’t… pays it.

The latest labour market statistics from the ONS show that annual growth in average weekly earnings for employees in Great Britain increased by 4.0%. After adjusting for the increase in prices this comes down to 2.1%. It’s positive which is more than can be said for much of the post-crash era (see chart) but will it be sustained? And is 2.1% too trivial and amount to get excited about? 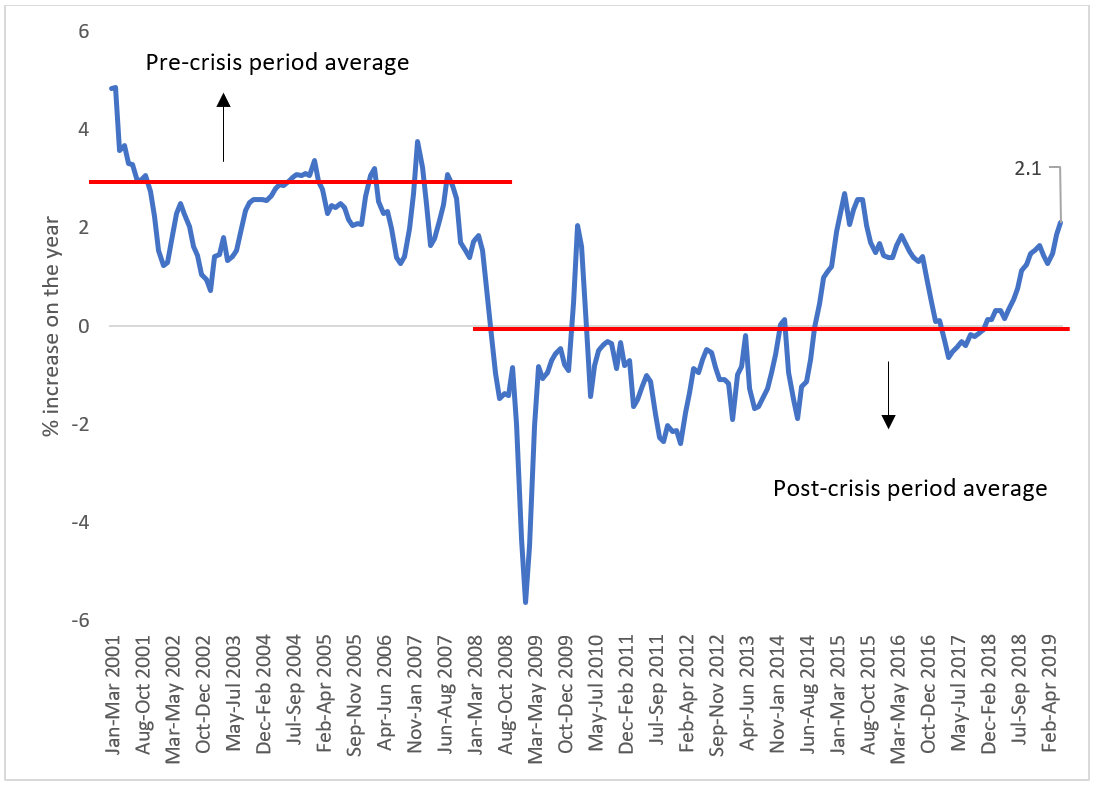 The rule of 70: or why compound interest is the eighth wonder of the world

Grabbing the odd year of positive earnings growth is good but what we need is sustained growth. This is when the magic of compound interest kicks in. If like me, you’ve forgotten the compound interest formula since GCSE or simply can’t calculate logarithms in your head then there is a nifty shortcut, the rule of 70. To estimate how long an initial quantity will take to double you take 70 and divide it by the rate of growth. So, if real earnings were growing at the current 2% it would take approximately 70/2 = 35 years for them to double. In the grand scheme of things, that’s not a very high growth rate and that’s not a very long time. The rule of 70 applies to growth, be it in pay, investments, GDP, or productivity. It’s the reason you are advised to start saving for a pension early, and the reason the communist party of China set such ambitious growth targets.

It’s also the reason that the last 10 years of poor earnings growth is so worrying. Small but steady rates of growth make a country prosperous. As the chart above demonstrates the post-crash experience averages out around zero which is why it is often referred to as a lost decade of pay growth. This challenges the idea that liberal democracies are a successful in generating widespread prosperity and that each successive generation will be better off than the last. It is popularly linked to the Brexit vote and polarisation of politics. It’s why the FT are asking Does capitalism need saving from itself?

The compound interest formula assumes a constant growth rate across the time period. This is may not be the case for pay going forward. The reason why we are so excited by a 4% nominal pay rise is because of just how rare an occurrence it is. The BBC reported that it was the highest rate since mid-2008. What we need is sustained pay growth. The current (and welcome) 2.1% real pay is due to a tight labour market and not an increase in employer’s ability to pay more. Record high employment/low unemployment are driving up wages as employers compete for workers.

To consistently pay more business will need to improve productivity. On this the most recent figures have been less positive than pay which ultimately means that pay growth is unlikely to be sustained. The important part of Paul Krugman’s overused statement that “Productivity isn’t everything, but, in the long run, it is almost everything” is the long run bit. The positive is that we have demonstrated that modest rates of growth can deliver big gains in the long run.

There are ample gains to be had on the productivity front. Productivity is not really a thing itself. It’s what happens when everything else is done right. When efficient transport networks make living and working in cities possible and when people are managed properly. The sum of a diverse range of good policy measures could add up to the modest change needed to kick start productivity growth and sustainable earnings growth.

Of interest to us at the CIPD is the growing prevalence of workplace-based research and initiatives to tackle the productivity challenge. Workplace initiatives are attractive as they are more immediate and lower cost than things like skills and infrastructure. Our own People Skills programme launched in Birmingham to offer free HR support to small firms through consultancy. It is accompanied by a free online resource the People Skills Hub which contains essential HR and people management resources for small businesses.

Earnings are growing but let’s make sure that continues by focusing on productivity.

When Fry was cryogenically frozen in futurama, the 93 cents in his account turned into $4.3 billion when he woke up 1000 years later. This is what can happen when you make time for compounding. For the purists we can check the rule of 70 using the simple compound interest formula on a more modest time scale.

To find t rearrange the following