The Usefulness of Applying Macro-Sector Results to Regional Levels

Context – the lack of timely economic statistics recording local impacts of Covid-19, and the desire to fill that gap

The spatial economic impact of Covid-19 is still emerging, and will do for some time to come. Early indicators such as the unemployment rate are not perfect due to distortions caused by the government’s furlough scheme uptake and other measurement issues, while in most other cases it is still too early to register local impacts.

This has led to a number of attempts (Centre for Cities[1], Centre for Progressive Policy[2], etc) to ‘localise’ impacts on the basis of macro-sector results or assumptions, by taking sector results (such as those produced by the OBR or a macroeconomic model) at national level and assuming that activities in each region behave the same way, with the same growth rates, and then aggregating the results to give an effective average (top-down) average set of results.

But how useful is this method, or to put it another way, how accurate are top-down assumptions when predicting regional and local outcomes in a recession?

Clearly, we don’t yet even know national-sector outcomes, let along local ones, but what if there were a way to assess how accurate the former were in predicting the latter, with perfect foresight?

Method – learning from the outcomes of the last (Great) recession

There is a way, of sorts. If we look back to the past (the Great Recession) and in particular the period of negative national GDP growth during 2008 and 2009, we know what the outcome was for macro-sector growth of GVA, employment, and productivity, and their sub-national equivalents at all spatial levels.

If we take these macro-sector results and apply them in the same top-down way as others are doing for the current Covid-induced crisis, what do we observe?

What happened during 2008-09 at the national-sector level?

Firstly, the chart below shows output (real GVA) and employment growth over the two-year period, 2008 and 2009. Areas of productivity increase or decrease are also highlighted (where output increases are relatively larger than employment) and the 45-sector disaggregation being used[3] is grouped across broad aggregates. We observe the following:

– A wide spread of sector outcomes, although as it is a recessionary period most sectors are clustered in negative quadrants.

– Of the larger sectors, those within manufacturing were among the hardest hit (four of the largest negative GVA growth rates are all in this activity), while non-market services (and some business services) are among those sectors that managed to maintain positive growth.

– For employment, the outturn broadly followed that of output but not completely (the correlation between the two sets of growth rates is around 0.5). There are some quite major differences, e.g. Pharmaceuticals, Electricity & Gas, and Architecture and Engineering Services, where output and employment moved in opposite directions. 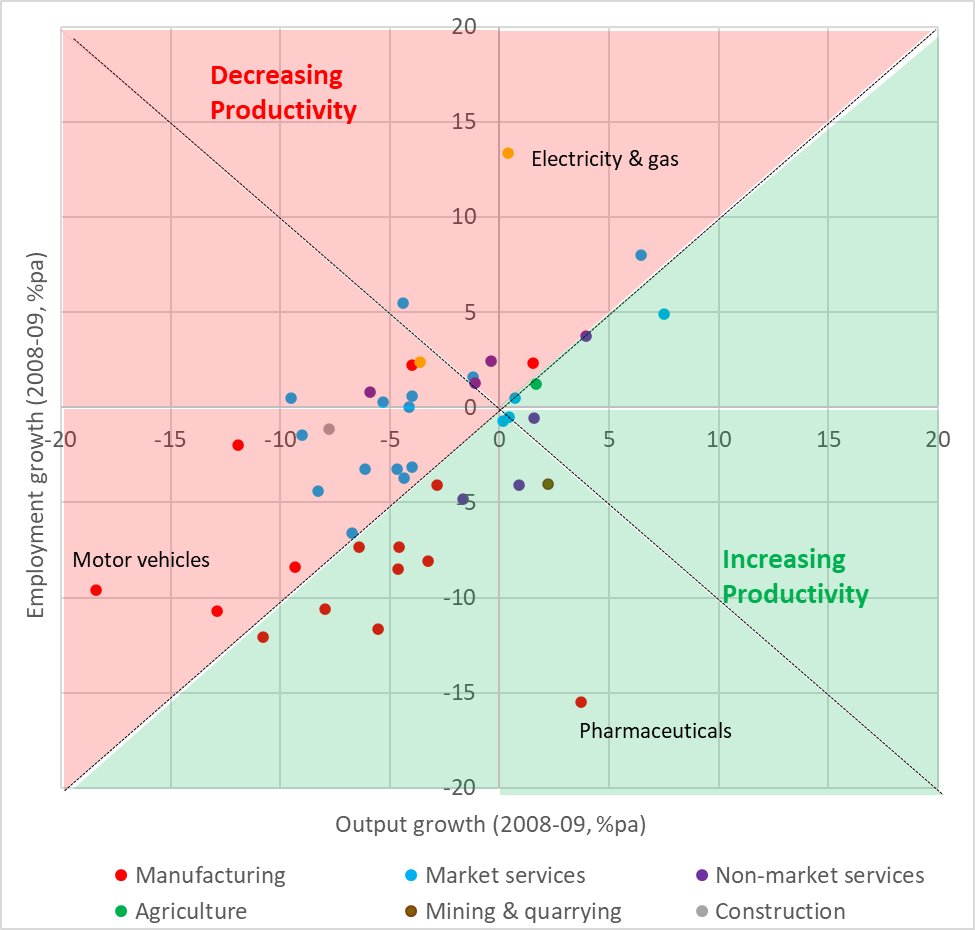 What happens when you apply these results to different spatial levels?

To find this out, we took the same 45-sector structure at three regional aggregations:

We then applied the above-mentioned growth rates and compared this with what actually happened to output, employment, and productivity. The results are shown in the charts below for the first two indicators. 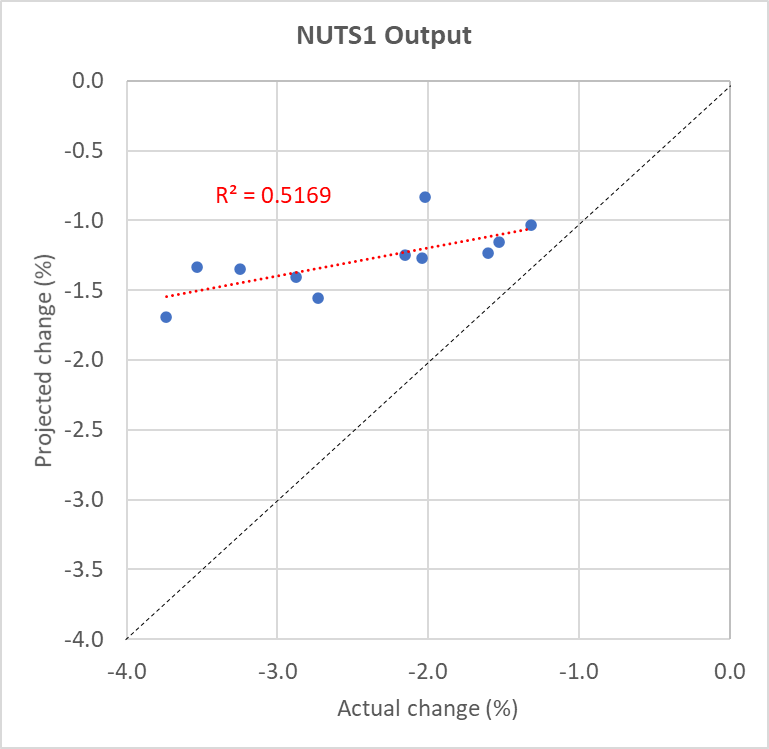 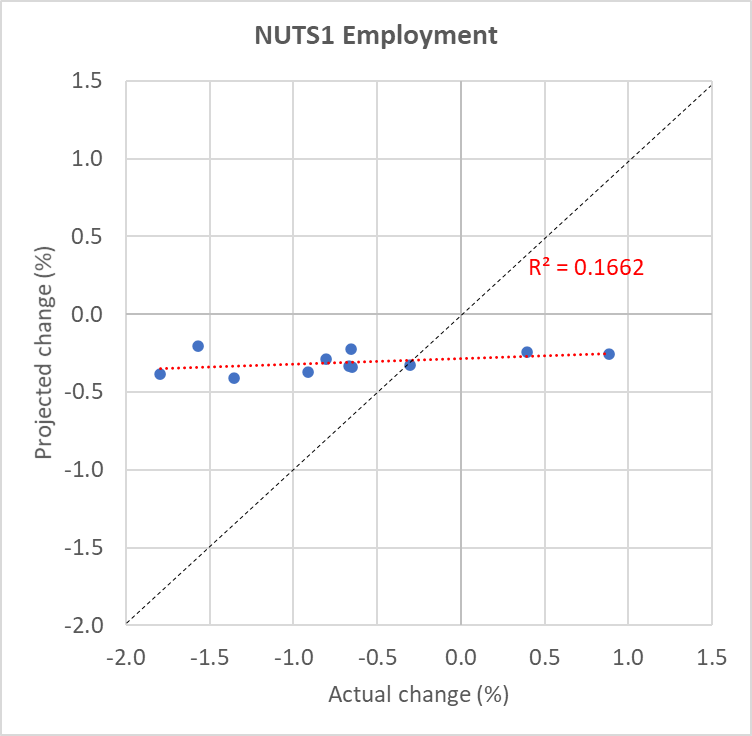 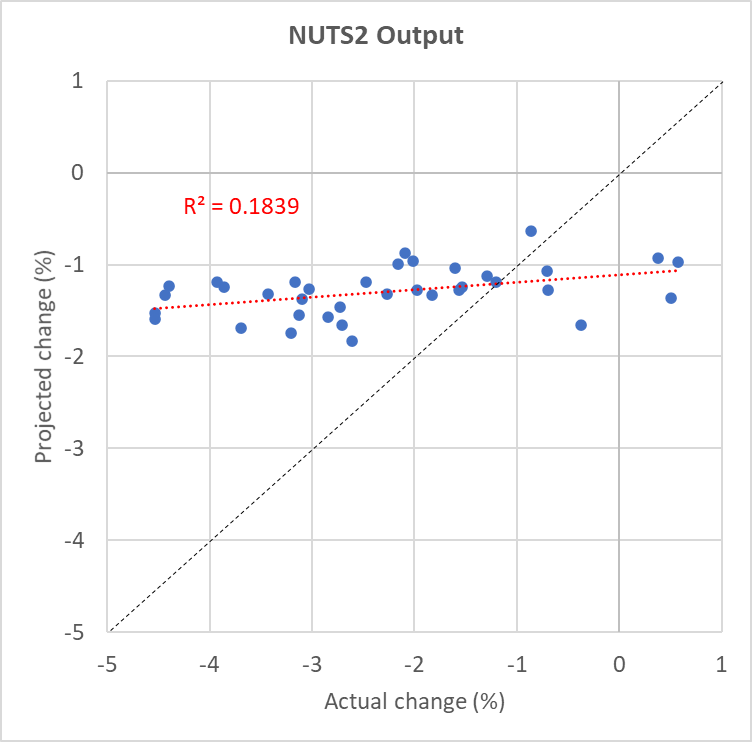 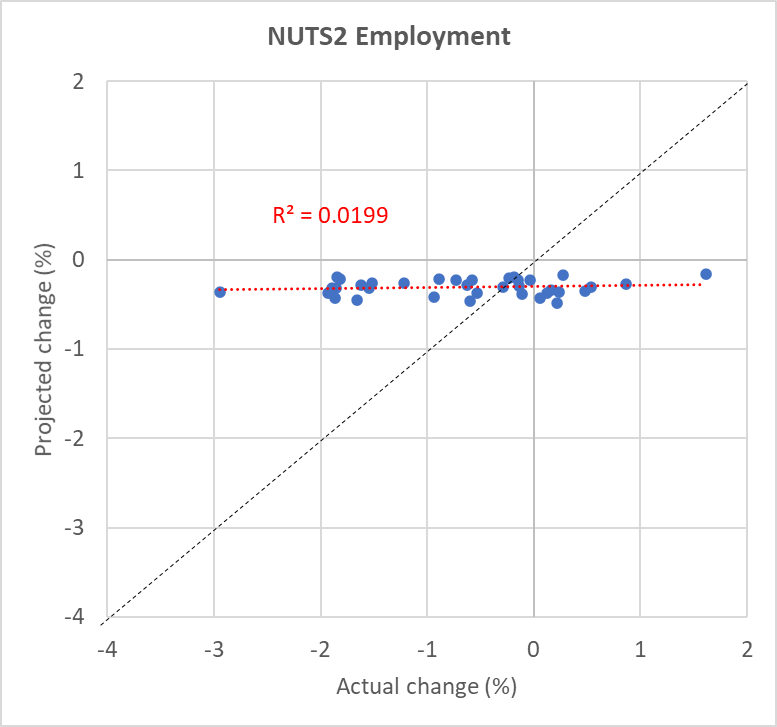 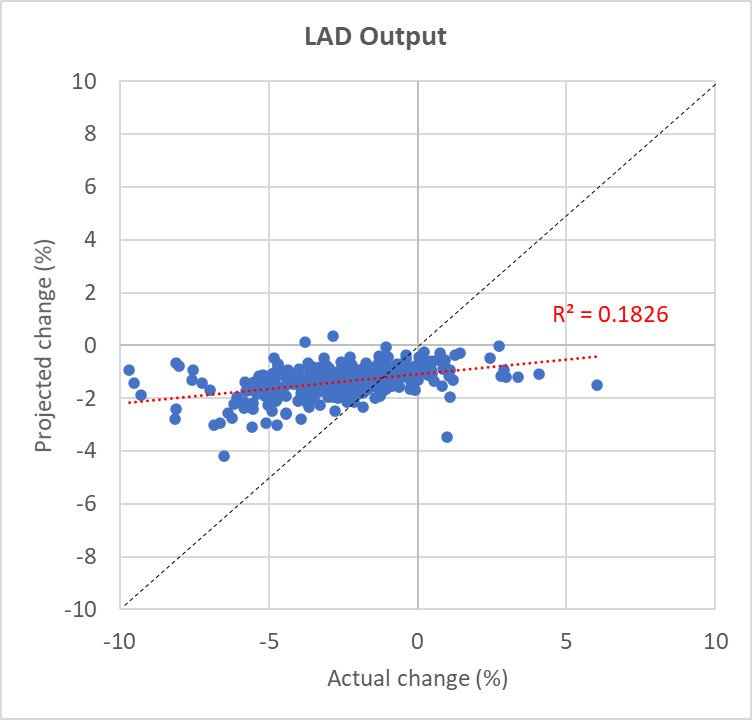 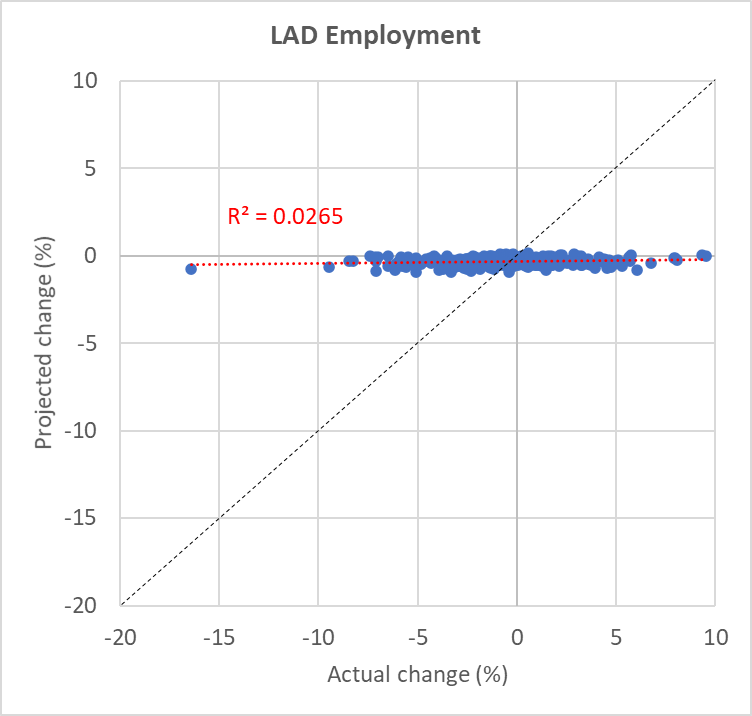 The main findings are that, even with perfect foresight, when applying a top-down approach:

– Given the increasingly similar sectoral structure of places around Britain (due to de-industrialisation and the rise of the service-sector economy) there is not much variation in the projected changes.

– The smaller the spatial level you are disaggregating to (i.e. the more local you get) the more likely it is that specific characteristics and heterogeneity will play an important role in determining outcomes, so the top-down predictions will be less accurate. For example, the tasks and functions undertaken within a sector will also play an important role in which areas do better or worse than the national average[4], as would other characteristics such as the degree of urbanisation[5].

– For productivity, whatever the spatial scale, there is no association between actual and projected growth. In other words, using a top-down method to predict what would have happened, even with perfect knowledge of the macro-sector outcomes, would be of no use at all.

We know the coming recession will be different in terms of the speed of its onset, the sectors which are affected (due to the nature of the shock) and the duration. No shock is exactly alike in its cause and effect. And perhaps this time, with wide-spread sectors so badly affected such as tourism, a top-down sectoral approach may be more accurate as, to some extent, everywhere is being affected in similar ways.

However, what we can learn from the past is that this isn’t usually the case. The devil is in the detail, and a place-based approach is really needed to understand the likely reaction, response, and effects that will, eventually, be observed.

[3] Based on Cambridge Econometrics’ local area database, which is itself based on official ONS data.

[4] For example, see other analysis undertaken by Cambridge Econometrics on this topic – http://www.camecon.com/wp-content/uploads/2020/06/2020-04-16_COVID-19_Local-slide-pack.pptx

[5] Such investigations are beyond the remit of this blog, but would present an interesting research topic.