by Hadi Arbabi. Department of Civil & Structural Engineering, The University of Sheffield

Our current understanding of and approaches to devising and selecting infrastructural and ultimately land-use interventions for better urban economic performance are often of limited capacity in providing long-term ‘place-based’ blueprints. Best framed by Sir David Higgins, the former Chair of HS2 Limited, what we need is an overall national transport strategy for and against which individual interventions can be constructed and appraised.1 In our Productivity Insights Network project, we attempted to quantifying a sense of productivity premium that may be locked in and associated with the spatial organization and connectivity of small-area neighborhoods and their demographic profiles within cities.

Emerging studies on patterns of urban scaling across systems of cities have sought to formalize and explain long-observed size-related agglomerations in and across different countries by developing explicit and implicit geographically embedded network models of cities’ inhabitants and mobility infrastructure.2 These works make explicit the assumption within the agglomeration-related work that average-aggregated urban economic output is a function of the number of human interactions fostered and facilitated by cities. Within these spatially explicit frameworks, long-term blueprints of infrastructure can then be thought of in terms of spatial layouts of the cities’ inhabitants that increase or maximize the number of interactions between individuals across the city and hence its economic output. Particularly, if given a certain labor and skills profile, the relative number of interactions between a city as is it exists in space and how it could potentially be (re)arranged provides a gage for the magnitude of potential productivity premium related to the city’s spatial organization.

What we have seen so far

In the rest of this post, I briefly summarize our main observations based on our optimization of inter-neighborhood distances in Sheffield to maximize its inhabitants’ interactions. I should mention in advance that our findings are mostly intuitive in themselves and might appear trivial. What is of importance, however, is that they are independently reaffirmed by our approach which can be seen to be more general in its assumptions especially avoiding strong ones regarding individual behavior.

This one is too obvious. It is easy to see that a trivial solution to optimizing inter-neighborhood distances, for maximizing individual interactions for a geographically embedded social network on a flat plane, is to stack individuals vertically to maximize density and interactions!

We have estimated Sheffield’s potential productivity premiums as the number of inhabitants’ interactions, under a varying influence of distance on interactions, relative to those of the city’s existing geography. When we assume a mobility infrastructure that assists in formation of long-range interactions already exists, there is virtually no difference in productivity of an optimized layout and only about a 12% advantage for an extremely densified layout. However, as long-range interaction formation becomes more difficult, ie, we assume a more realistic provision of mobility anywhere outside London, rearrangements of the city’s neighborhood layout can unlock a 15% increase in output with extreme densification signaling a near sevenfold increase in output.

For most cities, the neighborhoods with the largest number of inter-neighborhood interactions comprise the city center and often exist within the city’s ring road. City centers, therefore, house a high-density mix of residential use, commercial activities, and crucially employment. This combined effect of their density and mixed use transforms them to the foci of both inter- and intra-neighborhood interactions. Meanwhile, the further away one gets from the city center, the more the prominence of suburban commuter-belt residential use and fewer the opportunities for local interactions.

Delving into the inter-neighborhood distances after optimization shows that increasing the number of interactions in the city requires a change in the land use. In essence, city-center type activities need to be more easily accessible city-wide. As such, the long-term optimal spatial layout of cities can be seen as one more resembling a chess board pattern of residential/commercial use that both maximizes overall city-wide interactions and facilitates walkability.3 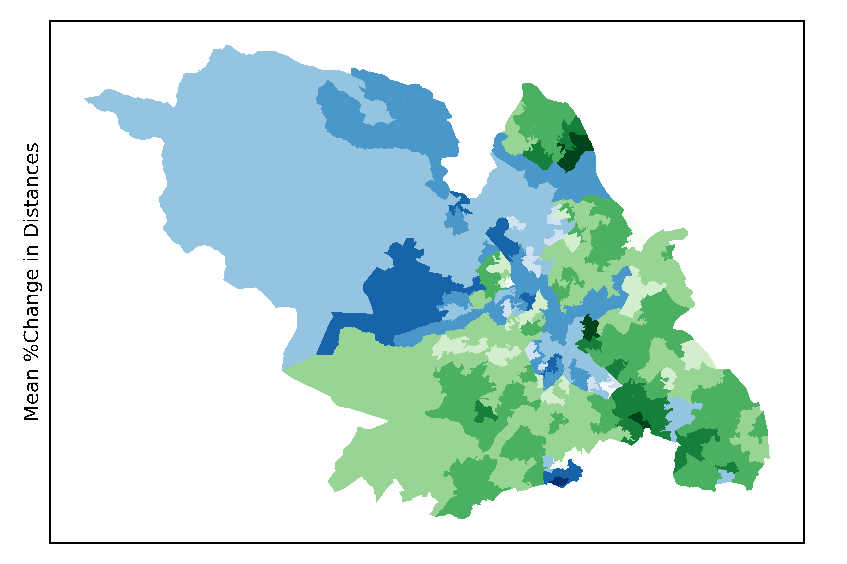 Choropleth showing indicative mean percentage change of inter-neighborhood distance for each neighborhood. Color scheme from green to blue corresponds to an average decrease of distances to an average increase in distances after optimization; and as such, whether the neighborhood as a whole needs to become more central to facilitate more interactions.

Mean increase in neighborhoods’ interactions correlates systematically with their population-weighted levels of education. While, the magnitude of these effects may be due to the particularly segregated organization of neighborhoods in Sheffield, the core reasoning remains the same as that underlying the need for mixed-use planning. Lower-income lower-education neighborhoods are inherently more likely to be vulnerable to effects of low long-range accessibility while simultaneously less likely to feature adequate employment opportunities. The break-up of core city-center type functionality to be more evenly distributed across the city cultivates more interactions in these neighborhoods. 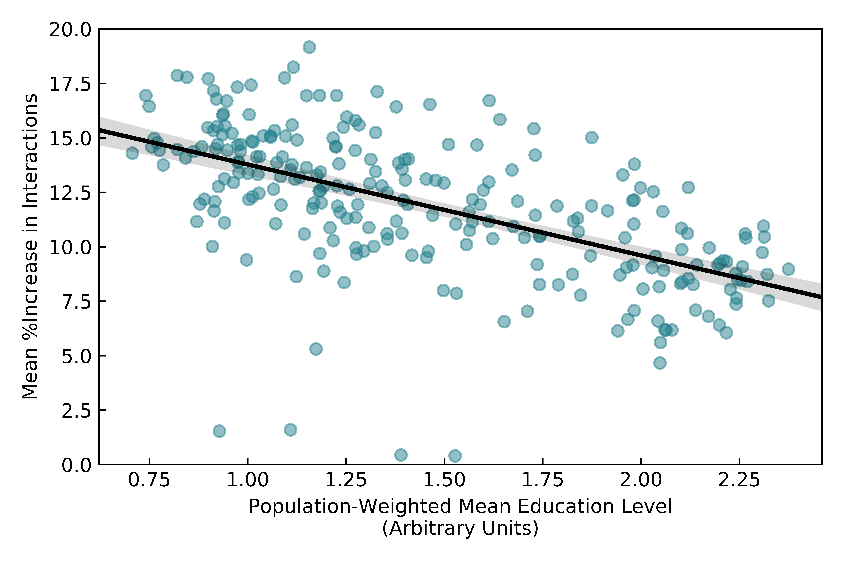 Mean percentage increase in neighborhood interactions against population weighted neighborhood average education levels. It is worth mentioning that the top 10% of the largest increases in interaction count because of our optimization of the layout involve neighborhood pairs with one area of low average income.

As a final note, we should perhaps mention that interpretations of urban scaling models of cities need not be constrained to purely physical aspects of mobility. Our approach has been motivated by and particularly focused on the physical aspect of the spatial organization of cities and the provision of mobility within them and we have, simplistically, quantified interactions and the possibility of their existence over distances in a city. With particular reference to the ongoing COVID-19 pandemic, the prevalence of home-working has forced a dramatic drop in physical intra-city mobility.4 However, for those sectors that have remained economically active despite lockdown measures, the underlying individual interactions involved in creating cities’ output have not completely vanished. Portions of these interactions are now simply forced to be made remotely. The spatial patterns of interaction that we have identified, ostensibly based on road distances between neighborhoods, can, therefore, be interpreted as priorities for provision of alternative and/or digital connectivity infrastructure.